GRNews
GreekReporter.comGreeceAncient Nicopolis In Preveza to Be Included In UNESCO Preserved Archaeological Sites 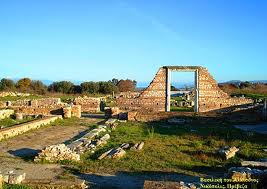 Ancient Nicopolis, situated close to Preveza in western part of Epirus, is a walled city founded in the 31 BC by Octavian in memory of his victory over Antony and Cleopatra at Actium.
It is a well-preserved archaeological site, a whole ancient city with odeum, theatre, walls and many more relics, and thus, officials of Preveza decided to try to add Nicopolis in UNESCO’s World Heritage Sites. A few months ago, the city council decided to take actions in this direction.
Vice-prefect Stratos Ioannou stated earlier this year that they have been given 1,500,000 euros to do works in the broader area of Nicopolis and especially on its theatre. “Our goal is to make Nicopolis an attractive site for both tourists and locals,” Mr Ioannou told atpreveza.gr.
Along with other active members of the city, they organized a photo exhibition presenting other Greek sites protected by UNESCO in order to encourage local community of Preveza support their efforts.

A few years ago, Greek authorities constructed the modern Archaeological Museum of Nicopolis, which hosts several interesting exhibitions all year round.