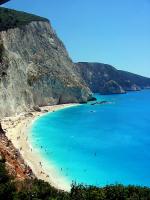 Austrian newspaper Kurier is hosting a big feature on Ionian island of Lefkas and neighboring city of Preveza. The editor of the article stresses that during her stay on the island, she did not have to struggle with crisis at all since there was a big variety of food, as well many gas stations and electricity, proving false in a sarcastic way international reports that Greeks lack in basic needs.

“Dreamy Beach” of Porto Katsiki and other scenic gulfs with blue waters are also praised by the editor. The Austrian paper reminds surfers that Lefkas could be their Greek paradise.

Agnes Baltsa, the Greek mezzo-soprano, who enjoys great acceptance by Austrian audience is also featured since Lefkada is her birthplace. Kurier refers also to private island of Skorpios, belonging to the Onassis family. Another magic beach, that of Aghios Nikitas, fascinated the editor as well.

But she does not write on Lefkadas’ natural beauty only. She informs future visitors that they will land in Preveza and thus, a walk there would be great. Tourists interested in ancient Greece could visit ancient city of Nicopolis, located few kilometres outside Preveza.

As for those who would like to have an experience in Epirus’ mountains and picturesque villages, there is Zagorochoria area in northern Ioannina, a couple of hours away from Lefkas, with their 46 villages, totally made of stone.