Iro Smith: A Beautiful Success Story Made in Greece 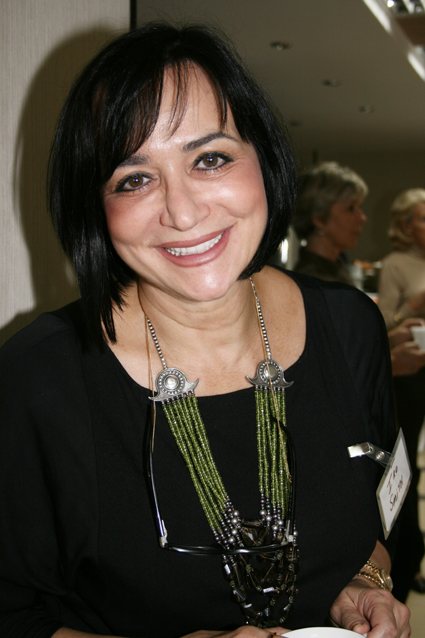 On the second floor of a commercial complex on the main avenue in the bustling central square of Glyfada, the dynamic Iro Smith runs the Greek branch of her “Wake Up With Make Up” empire, a permanent make up and beauty spa with offices in Dubai, Abu Dhabi, Bahrain, and the US. Catering to the elite of Arab society as well as European, Iro has done make up for the women of the Saudi royal family, organized art exhibits in Porto Heli for a cosmopolitan mix, and attended functions by personal invitation in the palaces of the Maharajas in India. “I believe I am the granddaughter of Alexander the Great,” she relates, “His spirit is what I carry because I have tremendous energy, desire, and a spirit of giving and caring.”
An incredibly charming woman, she beams with enthusiasm and positivity. Her story is an example of the drive and “dynamite” that the spirit of a Greek woman of the Diaspora carries. She has lived in the US and several Arab states without losing a sense of her identity.
Born into a middle-class family in Kavala, Iro credits her upbringing for her openness, interminable gregariousness, and exceptional social skills. She grew up in an “open house” with boundless happiness and laughter where she was instilled with the values of honesty, honor and integrity. “We never had any skeletons in the closet,” she states. After graduating from high school, she completed beauty school in Thessaloniki and found a job with an American construction company which had moved to Greece to begin oil exploration. It was there that she met her husband and changed her name to Mrs. Smith. She accompanied him to Saudi Arabia where she lived and worked in the Aramco compound as she became one of the first women to be given a work permit at a time when few women were allowed to work let alone drive.
She started her beauty business out of her home offering facials and other services. A conference sponsored by the international make-up organization Cynexa in Singapore paved the way for her exploration of permanent make up techniques. Her first client was herself and soon after her meticulousness and as she says over and over again, “honest hard work,” laid the foundations for a lucrative permanent makeup enterprise whose 9,000 clients and counting span the world and many cultures and socio-economic backgrounds.
A sprawling bulletin board in her salon with “Before and After” shots of her clients reveals the range of her services. Not only does her practice, administered much like the permanent tattoo process, allow for enhancements like eyebrow and lip, but also for medical corrections and even for camouflaging baldness in men. She has treated women who suffer from , has decreased the appearance of facial scars and has used the permanent inks to reconstruct aerolas and receding hair lines. She believes her services are more than skin deep as through her business she has been able to give her clients a better life, “When a woman looks good, she is better person to herself, to her family and to her society.”
Even though Iro has lived the majority of her life outside of Greece, returning during the warm months to run her busy practice in Glyfada, she confesses that she has never felt cross-cultural conflict. “I am a little of everything, American, Saudi, Bahraini, Greek,” she says, “I’m from the world.” She credits her attitude of open-mindedness, non-judgment, and acceptance of other cultures and people as the key to adapting to a variety of cultures. “I am not a critical person, and I respect the customs and traditions of the main culture . . . When you are able to see people all in the same way, it transforms your life,” she states. She is as comfortable with sitting for dinner with the Princesses of Arabia as she is with local Greek housewives.
Yet at the same time she adapted to the Arab way of life, Iro also kept true to her roots. She spearheaded the first organization of Greeks in Bahrain and Saudi Arabia. She was the founder and leader of the Greek woman’s group at Aramco. “I have never pretended to be anyone other than who I am,” she confesses.
As for her take on modern women’s issues and relationships, Ms Smith adamantly contends, “A woman should be a woman.” While not advocating that a woman be submissive and dependent, she does, nevertheless, understand there is a difference in the sexes that should be accentuated. She blames the unhappiness apparent in so many modern relationships to the breakdown of the traditional sex roles. Men no longer make an effort to treat women with respect as the “weaker vessel” that needs protection, and women do not go out of their way to give anything to men in return. Iro believes it is tantamount that a woman stay a truly feminine woman and cater to her husband just as she does not object to a woman using her charm and feminine wiles to appear attractive.
In both her professional and private live, Iro Smith has struck a harmonious balance. She is a representation of the modern Greek woman of the Diaspora who can be an assertive and ruggedly independent entrepreneur while still catering to a traditionally feminine aesthetic. She can be a citizen of the world while still remaining true to her roots. She owes her success both to “honest hard work,” a mantra she keeps repeating, and to her divine “charisma.” “I think I have a spirit—it is godly, like dynamite,” she explains, “that I can (to use a Greek expression) grab the priest by the balls.”
Irene Archos is the creator of the blog www.greekamericangirl.com

It was announced on Wednesday that Greeks have cut their smoking by more than one half over the last decade, according to a new ELSTAT survey.
Ancient Greece

The Greek word "kosmetika" is the root of the English word ‘cosmetics.’ The word also meant any product that protected the hair and face.
Diaspora