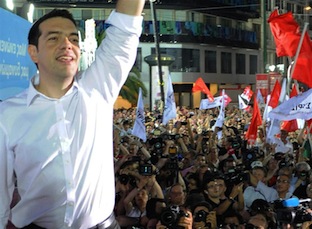 Greece’s leftist Syriza party wants to keep the country in the euro zone despite not agreeing to the austerity measures accompanying Athens’ second EUR130 billion agreement, its president said Thursday, ahead of this weekend’s elections.
Speaking at Syriza’s last major rally in central Athens before Sunday’s polls, party head Alexis Tsipras repeatedly stressed his party’s commitment to keeping the country in the single currency zone and eschewed any reference to more radical positions on privatizations and nationalizing banks.
“On Monday don’t bet your money on Greece exiting the euro zone. You will lose,” he said, according to a copy of his speech.
“No to the memorandum of bankruptcy. Yes to the euro with a national recovery plan, that will rebuild the economy and protect the people from bankruptcy.”
(source: Dow Jones)