Greek Electric, Gas Utilities Ask Banks for a Bailout Too 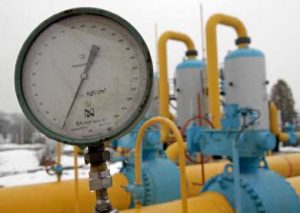 ATHENS – Short on cash and unable to pay its providers, Greece’s state-owned gas provider DEPA, supplied primarily by Russia’s Gazprom, has asked domestic banks for a loan needed to keep the power running, including to the country’s electricity producers in an effort to avert energy shortages this summer, the news agency Reuters reported from an interview with a company official.
DEPA must make a payment of $151 million this month to its suppliers but has not been paid by Greece’s electricity producers because they have not been paid for the power they provided either. The loan that is being arranged by a string of Greek private and public-sector banks would help keep the gas flowing for at least a month, a DEPA official told Reuters.
“DEPA is in negotiations with a consortium of Greek banks for a loan that will allow it to service its obligations for at least a month, until early July,” said the official, who asked not to be named. Greece imports all its natural gas from abroad. About 80 percent of its imports come via pipeline from Russia. According to industry sources, DEPA faces a June 22 deadline to settle obligations to Gazprom.
Last week, energy regulator RAE said it would call an emergency meeting with industry players to resolve the impasse. But the talks will probably be postponed for next week after a DEPA board meeting scheduled for June 11, a RAE official told Reuters. Shrinking power demand, bad debts and flawed regulation has created a $438.1 million shortfall in Greece’s energy system, which depends heavily on imported electricity and gas. The problem is acute enough that there are fears of blackouts during the height of the tourist season, an industry already slumping 30-50 percent because of political instability ahead of the critical June 17 elections that could see Greece forced out of the Eurozone if parties opposed to austerity measures demanded by international lenders are victorious.
Greece’s power grid operator, LAGHE, has a cash crunch and run up big deficits because its revenues have not matched the big subsidies it pays to renewable energy producers, as part of Greece’s efforts to become Europe’s solar energy provider. The deficit has gotten worse because of the economic crisis in Greece.
Two private electricity retailers went bankrupt without honoring their obligations to LAGHE. Unpaid electricity invoices have also soared after many consumers refused to pay an unpopular property tax charged on the bills of state-run electricity company PPC, the country’s biggest power producer, which is in talks with banks to roll over debt due by the end of this month. PPC covers about 70 percent of Greece’s power demand, most by burning its own coal and the rest by hydro power supplies.  It has a retail market share of nearly 100 percent, but its cash reserves have fallen to only about $287.9 million, far short of the $657.2 million it needs to pay its own bank loans later this month, Reuters reported.
With unemployment at 21.9 percent because of a deep recession worsened by pay cuts, tax hikes and slashed pensions demanded by the Troika of the European Union-International Monetary Fund-European Central Bank (EU-IMF-ECB) in return for two bailouts of $325 billion, beleaguered Greeks are unable to pay their bills and 300,000 utility customers have applied for special lower tariffs. The ratings agency Standard & Poor’s has lowered PPC’s rating and written that, “We believe the company has exhausted its liquidity sources and that its ability to honor its large financial obligations in 2012 mostly depends on external factors in the currently highly uncertain environment in Greece,” the ratings agency said.
In an interview with Reuters last week, PPC’s Chief Executive Officer Arthouros Zervos said he was confident the banks would agree to roll over the loans. Greek lenders, who depend entirely on European Central Bank funding, obtained $22.5 billion in recapitalization funds last month. “No Greek bank would have an interest in pulling the plug from under our feet,” Zervos said.
(Sources: Kathimerini, Reuters)