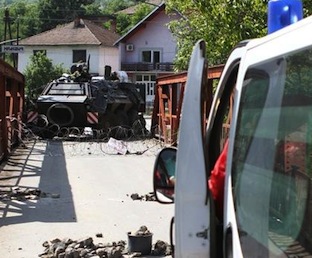 Greek KFOR troops set up two checkpoints on the road in Rudare and are now performing a routine traffic control. In addition to standard military SUVs, on one of the checkpoints could be seen a “badger” vehicle, designed to be able to overcome all kinds of obstacles on difficult roads, and a water cannon armored vehicle.

The removal of the roadblocks sparked a conflict between local citizens and KFOR soldiers in Rudare yesterday, but the situation has calmed down and no citizens are gathering there today, apart from the crowd created by Serbs from Kosovska Mitrovica and Zvecan heading to the cemetery in the village.

At least four Serbs were wounded in yesterday’s clash, three of whom were admitted to the hospital, while KFOR reported two of their soldiers receiving gunshot wounds.

The Serbs who wanted to prevent the roadblock removal gathered in Rudare yesterday morning after sirens went off in Zvečan and Kosovska Mitrovica. The clash with KFOR where stones were thrown and even gunfire used broke out soon afterwards.

The international military forces removed all the roadblocks from the Leposavić-Zvečan-Kosovska Mitrovica road, including the biggest one that the Serbs had set up in the village of Dudin Krš last summer. KFOR removed the roadblocks using heavy equipment, blocking the entire area during the operation. Their helicopters were flying over the area all day.