GRNews
GreekReporter.comLifeeventsAfter Hours, Private Masses Are Held by Clergy at Holy Sepulcher in...

After Hours, Private Masses Are Held by Clergy at Holy Sepulcher in Jerusalem 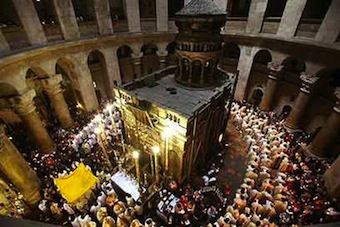 After tourists leave the Church of the Holy Sepulcher in Jerusalem at nightfall, a little-known but centuries-old tradition unfolds at one of Christianity’s holiest sites.

Clerics from the three largest denominations represented in the church—Greek Orthodox, Armenian and Roman Catholic—gather each night for special prayers reserved for the men who take care of the site where Jesus was crucified, buried and resurrected.

Starting at midnight, clerics and monks sing and pray for hours through the Holy Sepulcher’s darkest rooms. “It’s amazing to feel the liturgy with no people, only the monks,” admits Fr. Isidoros Fakitsas, the superior of the Greek Orthodox Patriarchate at the church. Isidoros said he has attended the services for 21 years.

Before starting these “private” prayers, the clerics sweep the floors, replace oil lamps and clean candleholders, after thousands of pilgrims visit throughout the previous day. Occasionally a small number of devoted pilgrims help them with the cleanup and are permitted to stay and pray inside the church all night. These are the lucky ones, as they get to know these rather secret liturgies where clerics reveal their deep love and devotion to the Lord.

“Mostly monks and religious people want to pray not only all the day, but also all the night, or part of the day or part of the night. It is part of the desire to pray without ceasing because prayers to God must be given all the time, day and night,” explains Fr. Eugenio Alliata, professor of Christian Archaeology at the Studium Biblicum Franciscanum in Jerusalem.

The night liturgies inside the Holy Sepulcher are regulated by a consolidated tradition; the Greek Orthodox start to celebrate Mass inside Jesus’s Tomb begins at 12:30am, before handing it over to the Armenians and then the Franciscans. The Greek Orthodox liturgy at the tomb is the longest, lasting for about three and a half hours.