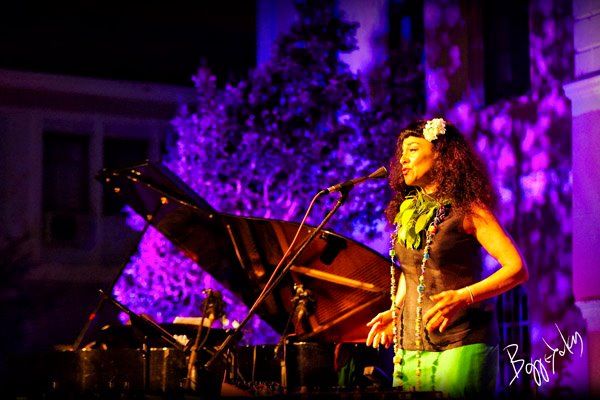 What could the financial crisis bring to a small Greek city? “Unity and action,” answers Maria João, who told Greek Reporter with great excitement that this trip to Preveza gave her much energy!
This year’s jazz festival may have been the 10th, but no one could doubt that Preveza was full of “fresh” air again. And when young people decided to meet versatile Maria João and travel with her musical boat around the city harbor, the financial problems seem like a drop in the ocean.
Besides, the 10th Jazz Festival in Preveza had free admission, giving jazz lovers all over Greece an extra advantage in attending it without a second thought.
A few minutes after their last rehearsal, Maria João and Mario Laginha spoke with us. We discussed their passion, jazz music, the financial crisis in Greece, as well as their homeland, Portugal.
-What is jazz in your opinion?
Maria João was the first to answer, and said that “jazz cannot be limited in a definition; it’s what a musician learns after many years of practice and creation. Music reflects the place you live, your birthplace, what you are, your experiences and even your mother tongue.”
She mentioned the close relation of jazz with Africa, saying that her mother came from Mozambique and her love for this kind of music was rather inevitable.
-You mentioned language is important to jazz, so should I assume that music stands with lyrics only?
Laginha explains, “music is more important than lyrics, but people are different from one another. Maria, for example, writes lyrics, too.”
João says that “music comes from words. When we discuss, we make some sounds and this is melody.”
The Mediterranean temperament of the successful Portuguese singer is obvious in every move she makes. She touches others when she talks. She does not even hesitate to comment on the mess of our notes, comforting us that her daily life is synonymous with “chaos.”
-Are there any people that have influenced you as personalities and as musicians?
“People I meet in the road,” answers Maria João instantly, adding, as is expected, several musicians, such as Betty Carter and Bobby McFerrin. Her mother was, however, the most important influence to her – “We had constant quarrels, she even slapped me when I did something wrong, but she was really important to me.” She jokes that, each time I ask her something, she replies, “I thank my mum.”
For the more restrained Mario, the purchase of his first piano was the greatest influence he had, not a specific artist. “But leader Nelson Mandela was a different story for me, he influenced me very much as a person,” continues the Portuguese pianist and composer.
-So, what’s your opinion about the extremist parties having entered the Greek Parliament?
Mario Laginha: “I hate every kind of racist or extremist phenomenon because these movements turn, in the end, against the humanity, as history has taught us,” and encourages Greeks not to forget that “Hitler managed to govern in Germany the same way.”
Maria João interrupted her colleague, adding “this stuff is pretty dangerous.” “In Portugal, we are in deep s***,” agree both artists, forgetting the political correct orders.
-What is the image of Greece in Portugal right now?
“We understand what you’ve been through. I think you react strongly to powerful governors’ commands and that everyone appreciates it. We see pictures of Greece everywhere, we ‘hear’ you protesting out loud,” shouts Maria, “but we [in Portugal] are softer. Sometimes, I need to grab a plate and break it downtown in Lisbon, to make some noise,” she continues.
“It doesn’t mean that someone is better than the other – we’re just different,” concludes the famous musician.
-Would you make any predictions about Greece’s political future?
“I don’t know what’s better for Greece, remain or exit the Eurozone. What’s important, we – people – must be united because no one could live alone,” replies the Portuguese composer.
The more lyrical and impulsive Maria adds, “there is always hope in the hopelessness.” Besides, she sees life as “a soup, in which you have to learn to add many things.”
-How would you describe Greece with 3 words only?
Mario Laginha stresses: Wisdom, Philosophy, Sports, while Maria João chooses the words Warmth, Kindness and Loud, because “you do everything loud,” says Maria laughing.
The success of their long-term cooperation is based, I assume, on their different characters, as they learned to communicate via their music and obviously, they did it pretty well!
While waiting for their next CD, which will release by the end of the year, they shake hands with us, saying “Efharisto” in Greek [Thank you] and add that they have had a “great time in Preveza!”
(Photo: Vagelakis Spyros)