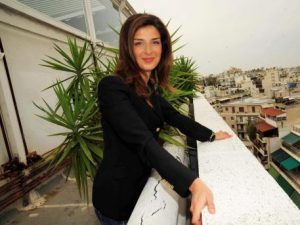 German newspaper Bild published an article titled “This is the Greek woman who asks us [for] 70 billion.” The Greek woman is Vicky Voulvoukeli, member of the Independent Greeks party and gave an interview to the German paper talking about the Greek crisis.

The 29-year-old woman grew up in Germany but returned “home” to help her homecountry by calling on Germany to give Greeks reparations for World War II amounting to 70 billion euros.

According to the German journalist, Independent Greeks is “a party opposed to the Memorandum and to Germany, in order to attract more voters.”

Voulvoukeli commented that, “Germany owes Greece this amount of money and should someday decide to discuss with the Greek government about this,” adding, “Germany should undertake the historic responsibility for this.”

But the German paper continues, “Voulvoukeli supports party leader Panos Kammenos, who refers to Germany as the ‘Fourth Reich.’ But she is brought up in Munich and Düsseldorf and moved to Greece only 4 years ago. That’s why she does not share his opinion.”

The Greek politician makes clear that Greece asked Germany for money, but the latter made the financial situation of her homecountry even worse. “Germany should behave towards Greece as an equal Euro-partner, not like a foreigner, as it now does,” adds Voulkouveli.