TechNews
GreekReporter.com Greece Golden Dawn's Leader Has Warped Sense of History, Says There Were 'No...

Golden Dawn's Leader Has Warped Sense of History, Says There Were 'No Gas Chambers' in Nazi Concentration Camps 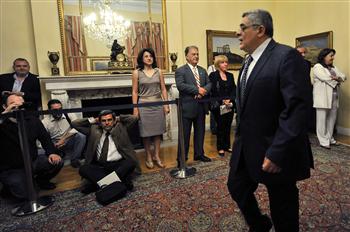 Nikos Michaloliakos is the leader of the Greek political party Golden Dawn, now representing 6.97% of the Greek citizens in Parliament. Michaloliakos gave an interview to journalist Stavros Theodorakis, whose show broadcasts social and humanitarian subjects, in a bid to convince everyone that Golden Dawn is a nationalist party and nothing more. But when Theodorakis mentioned his voters, Michaloliakos answered that he has “soldiers, not just voters,” adding, “I love [my] army!”
He denied the “Neo-Nazi” and “Fascist” labels, saying the movements’ leaders are dead and that his “Heil Hitler” salute during the Athens City Council in 2010 was just a joke.
As for the Holocaust, he claimed that there were no gas chambers or ovens at the Nazi concentration camps. As it seems, Michaloliakos “tries to distort history,” stated government spokesman Pantelis Kapsis on Tuesday. He also said that the extemist leader’s comments are “an extreme insult to the memory of millions of Holocaust victims, among who were tens of thousands of Greek Jews.”
During the interview, Michaloliakos told the host that “six million Jews murdered in the Holocaust is an exaggeration.” “It is a lie,” he continued.
The Israeli Community of Thessaloniki marked Michaloliakos as “ignorant of history,” since “77,377 Greek Jews were executed by Nazis at the concentration camps.” “It is a clear insult on survivors of the Nazi camps and the memory of those murdered brutally in crematoria and gas chambers, which Michaloliakos denies,” continued the Greek Israeli Community.
“Such assertions encourage fanaticism, bigotry and racism, posing a basis on which corresponding actions could take place,” concluded the Community.
For Michaloliakos, attacks on immigrants or homosexuals, who are “not normal,” is a natural consequence. Trying to appear more politically correct, at first he denied that Golden Dawn members hit illegal immigrants but later, he said  “They did it in [self] defense!”
Golden Dawn received 21 seats in the Greek Parliament. Their symbol resembles the Nazi swastika and their pre-election moto was “Let Greece get rid of [non-Greeks].”
Michaloliakos made clear that Greeks living in Canada, Germany, USA, Australia and elsewhere should not be granted local nationality, since “we should take DNA examinations to find out who is Greek or not,” saying that Greeks are only those people whose parents and grandparents, as well as themselves, live in Greece.

The "Lap Pool House," a modern house built on a slope of the Cycladic island of Tinos, is nominated for an EU award for Architecture.
Ancient Greece