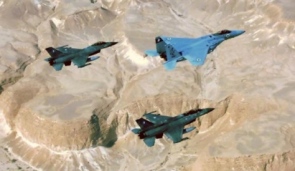 Greece, Israel, and the US are conducting joint air and naval exercises this week, in part to simulate defending sea-borne gas drilling installations around the eastern Mediterranean.
The exercises, from March 26 until April 5, are also intended to simulate air-to-air combat and anti-submarine warfare. The drill is being overseen by the US Sixth Fleet.
According to a report published on the website Defencenet.gr, part of the exercise will take place off the coast of Turkey, near the Greek island Mais. The exercise will continue off the southern coast of Cyprus before concluding in Haifa port.
The site reported that enemy forces in the simulation will have characteristics similar to those of the Turkish air force. The site also noted that the exercise would address scenarios involving defense of offshore gas platforms in the Mediterranean from enemy attack, anti-submarine fighting and air battles.
Operation Noble Dina was inaugurated in 2011 in what is seen by some as a coup for Greece and reflective of diplomatic changes in the eastern Mediterranean, Haaretz reported.
The US had conducted similar exercises (“Reliant Mermaid”) with Turkey and Israel from 1998-2009, but these were canceled after Turkish president Tayyip Erdogan suspended military cooperation with Israel in 2010.
Since then Israel has pursued more military and economic ties with Turkish rivals Greece and Cyprus. Last week Israel, Greece and Cyprus announced a deal to cooperate on exploiting natural gas deposits in the Mediterranean.
While the long-running Reliant Mermaid was based on joint humanitarian search-and rescue missions, Noble Dina is much more military oriented.
According to Haaretz, the 2012 exercises simulate possible conflict with forces that resemble the Turkish navy and are scheduled to begin in Greek waters near the Turkish coast, move near Cyprus and end in the port of Haifa.