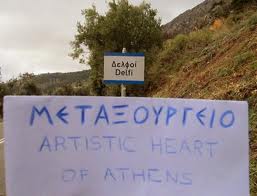 By Stefano Ingannamorte
Meta-Action today announced the launch of a new project with the aim of connecting, through photographic images, the bohemian art enclave of Metaxourgeio with the rest of the world. The Greek group’s ambitious plan is to establish at least 1000 new connections worldwide with artists of all genres to this central, multicultural district in Athens, best known as the artistic heart of the city, for the purpose of networking and bringing together artists from all points on the globe with creative people living in or connected to Metaxourgeio.
Meta-Action’s team members and supporters locally and internationally, who now number approximately 18,000, feel hopeful about the overall potential of Metaxourgeio Connects With the World, which comes on the heels of other major Meta-Action initiatives, to include Metaxourgeio by Night and Meta-Action’s exclusive, monthly artist interviews that have been a continuing source of inspiration for the group’s growing number of Facebook fans. Meta-Action’s Facebook-based project began in December of 2010 with a clear vision and no outside funding.
Within the span of one-year the Meta-Action team built a successful social media platform that is as rock-solid as the Acropolis to promote Greek culture and artists of all genres across the globe who have ties to Greece.
Visitors to Metaxourgeio will discover many unique restaurants serving authentic cuisine, as well as quaint, cozy cafes where locals and tourists meet daily for a cup of coffee and lively conversation. Seasonal festivals and social gatherings, private art galleries, popular theaters, performing arts schools and street artists are also part of the scene. Visitors to and residents of Metaxourgeio often comment that they find the myriad forms of street art that can be seen on virtually every corner of the district fascinating, which since October of 2010, has become home to the main public art gallery in Athens. The Athens Municipal Gallery was relocated to Avdi Square, which is Metaxourgeio’s main place of public assembly and outdoor events.
This new project is Meta-Action’s attempt to connect this historic district of Athens with all parts of the world as a way to spread the word about it far and wide. Meta-Action encourages professional artists, art students, art historians or simply the art-curious to take part by writing or drawing the place name Metaxourgio (meaning “Silk Factory”,  from which the district’s name was derived) on some surface area, and then taking a picture of this key project word coupled with a backdrop that shows something special or unique, such as well-known part of their city. Project participants are welcome to promote their artwork, their business or home, themselves, even their pets. The principal requirement is that the word “Metaxourgeio” and the place where the participant’s picture was taken are clearly visible in the photographic image produced for the purpose of connecting the two points in a spirit of artistic solidarity.
Participants are encouraged to be creative writing the name “Metaxourgeio”, which is one of the two key elements of Meta-Action’s new project. For example, one may write “Metaxourgeio, The Artistic Heart of Athens”, or: “Metaxourgeio, Athens with love” from your city” (e.g., New York, Paris, Rome etc.), or simply write the word “Metaxourgeio” in association with your place on the planet. By uniting geographically distant and diverse points on the globe, Meta-Action’s intention is to make the symbolic meaning of “Metaxourgeio” (i.e., Art, Culture, Beauty, Unity, Love) shine like a bright star in the sky with the hope of inspiring, uniting and setting free the creative muse in all people, whatever their geographic location may be.
Project Participant Instructions:
Take a picture with the word “Metaxourgeio” written somewhere in a place that is characteristic or representative of your locale and describe the town where you live. Include whatever you want to promote in the picture and would like to share with other people. Then, send your photograph to Meta-Action’s main e-mail address: metaxourgeio.in.action@gmail.com
One of Meta-Action’s key purpose is to attract artists of all genres to Metaxourgeio to promote and to celebrate artistic expression in this bohemian district of Athens, as well as to encourage and to promote artistic expression in all districts of the city and throughout the world. Meta-Action works locally and with global collaborators to bring art in its many forms of expression out from galleries, concert halls, theaters and indoor exhibitions into the open air as it was during the golden days of ancient Greece. A core objective of the Greek group is to promote creativity as a way to transform people’s lives and society itself.