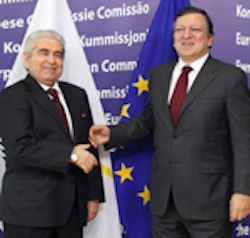 Preparations for the Cypriot Presidency are at an excellent state, EU Commission Presidenty Jose Manuel Barroso has said.
According to a press release issued here on Wednesday, Barroso was speaking during a joint press conference with President of the Republic Demetris Christofias, following a meeting they had in Brussels.
“I can tell you that we have seen at first hand the excellent state of preparations for the Cypriot Presidency which will begin on the 1st July”, he said, adding that “I am sure this will be a success and the Commission will provide all the help it can, both before and during the Presidency”.
Referring to the ongoing UN led negotiation process aiming to reunify Cyprus, divided in 1974 when Turkey invaded and occupied its northern third, Barroso said that “I fully support the UN process and the need for both sides to make steps forward”.
He said it is “important not to let the sands of history to slip through our hands”, acknowledging that “it is a difficult and very challenging process, but I have always encouraged different parties to remain committed to that project”.
“I also made it clear that the European Union, and not only the Commission, will support Cyprus as a member of our Union and in its role of Presidency of the Council”, he stressed.
Referring to the ongoing EU efforts to face the economic crisis and to promote growth and the creation of new jobs Barroso further noted that during the next presidency it is important “to make clear and to explain to our citizens that we are going through a very challenging period where some structural reforms are in fact very challenging, but that there will be light at the end of the tunnel and that together we should work for growth enhancing reforms in Europe”.
“I thank Mr. Barroso warmly for his position with regard to the EU-Turkey relationship” President Christofias said, on his part.
He explained that “we do not want Turkey to stay out of the EU”, adding that “what I have declared many times is that we support the full accession of Turkey into the EU always of course with the condition that Turkey will fulfill its commitments to the EU, which result also from the criteria and from the agreement for the Customs Union of Turkey with the EU”.
President Christofias also thanked the EU “for the position of principle that it has with regard to the explorations for the discovery and extraction of natural gas in the Exclusive Economic Zone of Cyprus”.
Referring to the meeting the Cypriot representation has had with the College of Commissioners, President Christofias said that “we have ascertained a convergence of views with regard to the goals of the Commission and the goals of the Cypriot Presidency”.
“It is true that we have before us a very ambitious program of action during the Cypriot Presidency”, he noted, adding that “very important issues of EU policy must be concluded and decisions be taken during the Cypriot Presidency”.
He mentioned the conclusion of the negotiation of the new multiyear financial framework 2014-2020, the conclusion of the Common European Asylum System, the promotion of the strategic goals for Europe 2020, the new sustainable Common Agricultural Policy and the issue of strengthening the small to medium businesses and addressing youth unemployment.
President Christofias further said that “we talked about energy issues and energy conservation and further protection for the environment, increased support for research and innovation, further promotion of economic governance, the promotion of a comprehensive sea policy, for which I aspire that Mr. Barroso will be with us at a conference that will take place in Cyprus during our Presidency, and a deepening of the neighborhood policy with emphasis on the southern dimension”.
He also referred to the ‘Arab Spring’ saying that “Cyprus is the southernmost tip of the EU and we aspire to become a bridge of joint cooperation between the countries of the Eastern Mediterranean and the EU”.
President of the Republic Demetris Christofias, accompanied by a ministerial delegation is paying a visit in Brussels between Tuesday, February 21 and Thursday, February 23 for contacts with the College of Commissioners as regards the Cypriot EU Council presidency at the second half of 2012.
The delegation includes Foreign Minister Erato Kozako Markoullis, Acting Finance Minister and Communications and Works Minister Efthymios Flourentzou, Interior Minister Neoclis Sylikiotis, Commerce, Industry and Tourism Minister Praxoula Antoniadou, Agriculture, Natural Resources and the Environment Minister Sofoklis Aletraris and Labour, Social Insurance Minister Sotiroula Charalambous, Government Spokesman Stephanos Stephanou and Deputy Minister for European Affairs Andreas Mavroyiannis.
(source: cna)