US’ Oldest Continuously Published Greek Newspaper Gets a Makeover

Founded in 1904, Chicago’s The Greek Star, the oldest continuously published Greek newspaper in the US re-launched yesterday, revealing a new design, format and logo, as well as refined editorial content. From the moment it hit the streets, the premiere issue, bearing the headline “Does Greece Matter?” generated tremendous buzz. 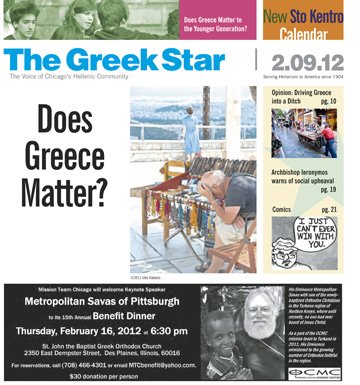 This rhetorical question makes the reader ponder why and how Greece matters, individually, and to the world. Articles analyze this question in the context of the younger generation, in Greek cinema, Modern Greek literature, food, culture and more. Find Op-Eds that examine the crisis in Greece today; and political commentary from Dan Georgakas, the Director of the Greek American Studies Project at the Center for Byzantine and Modern Greek Studies, Queens College (CUNY), and editor of the policy journal of the American Hellenic Institute. Learn why Chicago 27th Ward Alderman Walter Burnett, Jr. calls Greektown “a hot community,” describing it as “part of the economic engine of the city.” There’s much more inside.

“The Greek Star has a long and honored history in Chicago and is a powerful influence in the community,” said Diane Adam, editor of the newspaper. “We are excited about our relaunch and to continue our mission as the voice of Chicago’s Hellenic community.”

The print edition is currently available by subscription only. A new interactive website will be unveiled next month, including subscription-only content. Print subscribers will receive digital content for free.  The Greek Star will continue to report news from the local Greek community, as well as news from Greece and the Diaspora. They’ll expand their coverage, exploring Hellenic issues around the globe with more in-depth analysis, and more closely examining the Greek-American experience.

Derek Chauvin Found Guilty in the Murder of George Floyd