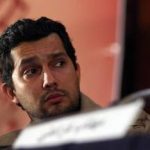 The Iranian movie star Hamed Behdad rejected a proposal to act in a project that will be helmed by world-renowned Greek filmmaker Theo Angelopoulos.

He visited Angelopoulos in Istanbul on Tuesday and was tested on Italian and French languages with Monica Bellucci, the Italian star who is scheduled to appear in the project, Persian news website Cinamaema reported on Wednesday.

However, he refused to act in the project after he was informed about the film’s plot.

“Although I am very interested in European cinema…, I refused to appear in the film because the film’s story conflicts with social and cultural beliefs in my country,” Behdad told Cinamaema.

Iranian cineastes have to gain the approval from the Ministry of Culture and Islamic Guidance before entering into any foreign project.

Behdad had been bothered deeply by starring in 2009 in “No One Knows about Persian Cats”, an unauthorized film by self-exiled filmmaker Bahman Qobadi about official restrictions on music in Iran.