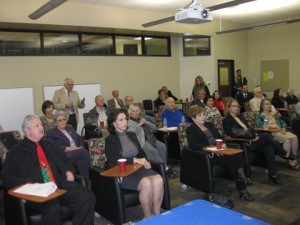 This time the AFGLC is introducing an academic program on the Tampon Springs campus of St. Petersburg College, Florida.

After successfully creating an endowment fund dedicated solely to defray part of the expenses related to this program, the Administration of the College made the Hellenic Studies a reality.

This initiative began in 2009, when Dr. John Balis envisioned an even stronger connection with the Greek community in Pinellas County in general, and Tarpon Springs in particular.  This expanded connection would be based on a partnership between the AFGLC, the Interdisciplinary Center for Hellenic Studies (ICHS) at USF-Tampa, the Tarpon Springs Campus of SPC, and the citizens and students in Tarpon Springs and surrounding areas.

To further develop the relationship with the AFGLC and with the immediate community, at the request of the AFGLC President, following in the footsteps of Dr. Balis, the Tarpon Springs Campus of St. Petersburg College initiated a pilot Hellenic Studies program, based on the AFGLC’s Interdisciplinary Center for Hellenic Studies model.

There are four courses in the initial offering:

St. Petersburg College’s leadership and the academic and campus leadership of Tarpon Springs Campus are excited about the program’s potential and fully committed to the growth and expansion of these course offerings.

AFLGC and the Greek community view the pilot program as the beginning of a unique cultural and academic center at Tarpon Springs Campus, a new Interdisciplinary Center for Hellenic Studies.

The non-profit AFGLC was founded in 1992 and has its headquarters in Tampa, Florida. Its primary goal is to establish chapters in cities throughout the United States which, in turn, work with benefactors and local colleges and universities to establish Interdisciplinary Centers for Hellenic Studies.

These Centers, through their unique academic programs, preserve and promote Hellenism by educating American college students about the seminal contributions of Greece to Western civilization.