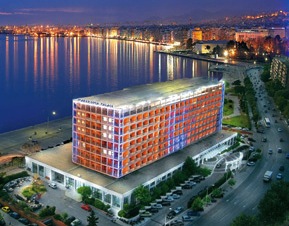 One of Greece’s best-known hotels and a Thessaloniki landmark, the Makedonia Palace is to close down at the end of the year, the company that manages the building said on Thursday as daily Kathimerini reports. The Daskalantonakis Group issued a statement saying that it had failed to reach an agreement with Greece’s main social security fund, IKA, which owns the building, to renew the lease.
Reports suggested that the hotel owners wanted IKA to reduce the rent for the 1970s concrete and glass building by 40%. However, speaking on television on Thursday, IKA director Rovertos Spiropoulos said the fund was not willing to drop the monthly rental demands of 250,000 euros.
He said that an international tender would be launched to find a new tenant for the building. The Makedonia Palace, which is situated on the Thessaloniki promenade just a few meters from the northern city’s famous White Tower, has almost 300 rooms.
It is the temporary home of the Greek prime minister and cabinet when they attend the Thessaloniki International Fair each year, and the resting place for celebrities from the world of cinema who attend the city’s annual film festival.
The current lease is due to run out in January next year but the Daskalantonakis Group said that it is not accepting any reservations beyond December 27.
The company has been renting the building for the last 16 years. It said that during that time it has paid some 47 million euros in rent and spent another 26.6 million euros on maintaining and renovating the building.
The group said it has offered its staff, thought to number about 120, the option of working at one of its other hotels.