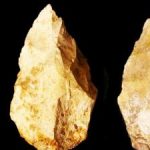 From cave painters to Greek sculptors to post-modern filmmakers, humanity has always had its share of artists. Now, there’s evidence that humans were making art thousands of years earlier than we thought.

Archaeologists have uncovered what they believe is a 100,000-year-old paint workshop in Blombos Cave, South Africa, about 186 miles east of Cape Town. The discovery indicates that our early Homo sapien ancestors had a basic knowledge of chemistry.

“The recovery of these toolkits at Blombos Cave adds evidence for early technological and behavioral developments associated with Homo sapiens and documents their deliberate planning, production, and curation of a pigmented compound and the use of containers,” the study authors wrote.

“They really knew what they were doing. It’s not just idiosyncratic behavior, but it’s a very planned process,” said Francesco d’Errico, study co-author and researcher at the University of Bordeaux in France.

This cave seems to have been used as a workshop, and then the early Homo sapiens left it behind shortly after making these compounds. It appears that sand blew into the cave and very quickly covered these objects, preserving them throughout the millennia.

So far no paintings have been found on the walls of the cave. Scientists speculate that the paint was used for body decoration, or as an antiseptic for preparing animal skins, or both.

“It may be combination of functional and symbolic reasons,” d’Errico said. “In traditional societies, the symbolic and functional often go together. One reason cannot exclude the other”, he concluded.