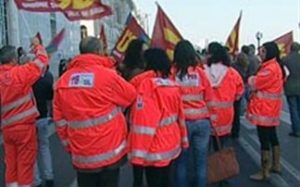 A Left Union named Unione Sindacale Base demonstrated outside the Greek Embassy in Rome, on Thursday September 22.

The USB asked from the Greek Government to withdraw the financial austerity measures and not to adopt Troika’s requests, which will worsen the situation.

The almost 20 members of the union were carrying placards with the words “Solidarity to the Greek employees. Bosses must pay the crisis”

The chief member of the union noted that it is not only about Greece. “This situation affects Italy as well and we should fight for our rights,” added Emida Papi.