GRNews
GreekReporter.comGreek NewsThe Cooking Odyssey is about to embark on its journey

The Cooking Odyssey is about to embark on its journey 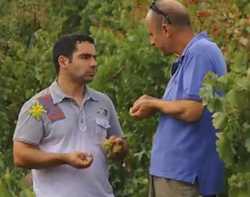 From the cradle of Western Civilization, the land of Socrates, Aristotle, Plato, Homer, Zeus, Hercules, Athena and beyond comes a first-ever culinary television series that showcases the wondrous sights, sounds and tastes of Greece. Viewers will embark on a Grecian odyssey to explore the authentic tastes and history of Greek cuisine.

“The Cooking Odyssey” is a 13 episode series filmed on location in Greece and in an eco-friendly kitchen in New York, which offers television viewers of all ages and backgrounds a tantalizing first-hand look into the world of Hellenic culture and all its traditions. From the mountains of the Peloponnese to the crystal blue waters of the Aegean Sea, “The Cooking Odyssey” showcases an array of breathtaking islands and regions of Greece for a truly unique culinary experience.
Chef Yanni leads viewers on a culinary voyage to highlight the Mediterranean diet, meet fascinating people and explore ancient places in modern times. Viewers will learn about Greek cuisine with special simple-to-follow cooking demonstrations, and history, from the locals at each place that is visited.

This television series brings the incredible landscape, glorious sun, natural beauty and the culinary delights of Greece into the home of each television viewer.

“The Cooking Odyssey” aims to be a virtual Greek gastronomic culinary odyssey never before seen on television.

Be sure to check your local PBS station for scheduling.