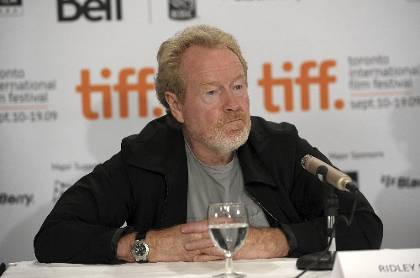 The Alien 5 Five Prequel is the fifth movie in the Alien franchise based on the original Alien film, created by legendary motion picture director Ridley Scott in 1979. Twentieth Century Fox announced today that Ridley Scott will direct Prometheus, an original science fiction epic, for worldwide release on March 9th, 2012. The initial draft of the script was written by Jon Spaihts based on Scott’s idea. Damon Lindelof and Scott have since been working together on the current version which has expanded the story in new directions.
Story details are being closely guarded so as not to spoil surprises for moviegoers.  Scott explained the outline of the film and its genesis as follows: “While ‘Alien’ was indeed the jumping off point for this project, out of the creative process evolved a new, grand mythology and universe in which this original story takes place.
Of the five major roles to be cast, Noomi Rapace is the first actor signed to star in the film. The young Swedish actress landed the role of scientist Elizabeth Shaw, after Scott saw her portrayal of fictional Lisbeth Salander in the film “The Girl with a Dragon Tattoo”. There is another major female role in the film, which is being circled by Charlize Theron and Angelina Jolie.