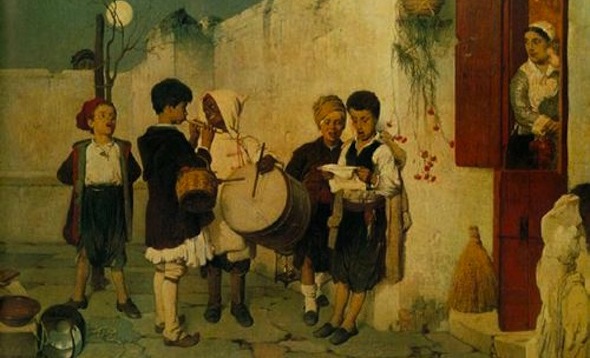 Christmas is one of the most celebrated, if not the most celebrated holiday of the year. If you are living in Greece or plan to travel to Greece for Christmas this year, read on to learn what to expect this season and see how the Greeks celebrate this holiday.
This time in Greece there are traditions that have been carried on from many years ago.
Christougena, which in Greek means Christmas, is celebrated on the 25th December and is a time when families come together to celebrate. Greece has it’s own version of Santa Claus, they call him Saint Vasilis, who comes to their home on Christmas eve to deliver a few small gifts to the children.
The Greek twelve days of Christmas begins at Christmas and continues until January 6th, which is known as the Feast of Epiphany. During these twelve days of Christmas, people keep their fires in their houses burning throughout this period. This is to keep evil spirits away from their homes through their chimneys. Often herbs such as asparagus, thistle or hyssop are hung above the fireplace, because they are considered to be ‘protective’. They are an added protection to guard away the evil spirits. These evil spirits are the nearest equivalent to the Christmas elves from other beliefs. These Greek ‘elves’ are called Kallikantzari, and are believed to be evil spirits who target people during the twelve days of Christmas. The description of the Kallikantzari varies, but they are usually thought to be male and have hooves or wooden boots, which are better to harm people with. There are many old, wicked fables that are told in Greece regarding the Kallikantzari, usually about a young girl being snatched by them.
Christmas in Greece is a very religious holiday. Everyone in Greece is fully aware of the beliefs and the story of Christ. People of all ages understand that the true reason for celebrating Christmas, is to celebrate the birth of Christ and is not just about exchanging gifts. On Christmas Eve the traditional Greek meal is stuffed Turkey roasted in the oven. The festive season starts on the 6th of December, which is the Feast of St. Nicholas day. From this date until the January 6th (Feast of Epiphany), presents are exchanged and the Christmas season is in full swing. Although the Greeks celebrate the Christmas holiday for about a month, there are fewer decorations and displays around, compared to other countries.

So Kala Christougena or Merry Christmas everybody from Greek Reporter