Adoni Maropis is probably most recognized for his passionate portrayal of lead terrorist Abu Fayedof the hit TV series “24” series six, opposite Kiefer Sutherland. Some of Adoni’s other diverse roles include: the flamboyant evil sorcerer Quan Chi, in the TV show “Mortal Kombat Conquest” (1998), the sarcastic undercover agent in “The Gristle” (2001), and the regal falcon-man in “Hidalgo” (2004), starring Viggo Mortensen. His exotic looks also helped him land supporting roles in memorable films such as “The Scorpion King” (2002) with the Rock, “Troy” (2004) with Brad Pitt, and “Bad Company” (2002) with Chris Rock and Anthony Hopkins. Adoni is also the co-author of three exciting and inspirational screenplays; one will be shot in Crete, Greece.

After years of being entertained by Adoni’s impromptu comedic performances and impersonations which began when he was a small child, his father told him that the suit and tie of the business world would probably choke him to death.  His father encouraged Adoni to give acting a shot. Surprised yet intrigued at this suggestion, Adoni enrolled at a performing arts school and studied acting, dialects, singing, and a bit of dance.  After three years of theatre with the help of his younger brother Chris, he headed for Hollywood. . .

What part of Greece are you from?
I was born and raised in Pittsburgh, PA. My mother, Despina, was born in Hania, Crete. My father, Petro, was also born and raised in Pittsburgh, PA although his parents (my Papou and Yaya) came from the Sfakia area of Crete in the early 1900’s. When my father went to Crete for the first time in 1960, he laid eyes on my mother during the final week of his stay and within days married her. She came over a few months later. With that said, I consider myself a FULL-BLOODED CRETAN (the Texans of Greece, they say). In other words… don’t mess with me!!!

When did you move to Hollywood? How was the transition?
I moved to Hollywood May of 1988. My brother drove out with me. The transition was difficult except for the amazing blue sky and sun every day for the next 4 months. I started out doing catering and delivery and also security at big events. The little money I made was not worth the effort. My first 5 years I felt like I was locked up in prison. I was living in horrific places with barred windows and for two years even a barred patio. Many homeless in Hollywood lived under my patio sometimes asking for some money (a nickel once) and food which I would give them at times through the barred cell which was my patio. Honestly, when I was on the patio or rather inside the patio, I felt like I was a gorilla in a zoo. Actually, gorillas have it much better these days. Then I got a job at Universal Studios in the Wild Wild Wild West Stunt Show. I had a fear of heights that I had to overcome because I was the cowboy in black who had to get shot and fall 2 stories to my death–crashing through slabs of wood. It’s actually a very funny story how it all came about with me getting over my fear, but I nearly crippled myself a few times in that fall. 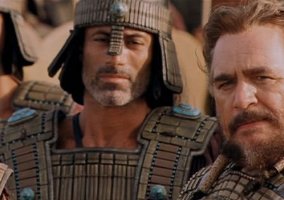 What was the biggest challenge?
At the moment the biggest challenge is getting a script written by me and my dad made into a movie. More on that later. Always with me, the biggest challenge has always been simply living as a Type 1 Diabetic and having to adjust on any movie or TV sets. Diabetics should try to have a more consistent lifestyle as opposed to eating lunch at say 2am. But, I have geared myself up for this unusual lifestyle. But in regards to Hollywood…the biggest challenge has been to weed through the muck and find the people with truly good intentions. When I came to Hollywood, it seemed I was sort of a piece of meat that quite a few wanted to take a bite of–from all the acting scammers to the not so good intentions of some agents and producers. To this day, actually the greatest challenge is the Catch 22 of this business. For instance, to get in SAG you need to be cast in a part… but to be cast in a in a part you need to be in SAG.

You are a Type 1 diabetic. How does this affect you?
Adding to the previous question, let me first say that I am blessed to be a diabetic… a Type 1 Diabetic. Type 2 Diabetics usually can change that by simply eating better and working out a little each day or week… consistently. I actually say “I AM A DIABETIC” as opposed to saying “I have diabetes.” The latter sounding to me like I have a disease that’s killing me as opposed to saying I live my life and accept that I am a Diabetic. Anyway, it affects every part of my life because I always have to know how I am feeling… “What’s going on? Are my sugars high? Low? What do I need to prepare for in the next few seconds… minutes… hours? How strenuous…stressful…etc… etc?” It’s like being an Olympic athlete, doctor, and accountant at the same time. Having to maintain a high-level fitness regiment and checking my blood sometimes over 10 times a day and giving 6 to 10 shots per day and recording everything… always. Yes, it’s difficult. But, life is difficult and I live by some sayings such as “I had the blues because I had no shoes… until upon the street I met a man who had no feet!”… and “He who laughs…Lasts!” ← I came up with this one as a young boy when I was really trying to say “He who laughs last…laughs loudest.”

Anyway, no matter how difficult life is… there is someone or rather many people in the world who are much worse off than you. The key to my success–especially growing up at a time when diabetics were supposed to be weak, thin, sick, pale, in and out of hospitals and most certainly dead by age 25—was having with and around me tremendous doses of LOVE, LAUGHTER and FITNESS. These three things can overcome and conquer a lot of the evil eyes in life!

You have played many different roles, what was the one you enjoyed the most?
Well, two roles stand out mostly for me. The first is portraying the terrorist Abu Fayed from Season 6 of the TV hit series “24.” That role was meant to be for me being that my dad survived a terrorist attack in 1973 by the PLO (Palestinian Liberation Organization). He explained to me—a 10 year old at the time–who the terrorists are and why they do what they do. As the saying goes, “One man’s terrorist is another man’s freedom fighter.” Above all, my Baba didn’t pass on hate to me towards the Palestinian people. To read his article, A Brush With Death, which is an account of his ordeal during the terrorist attack… please go to my main website at www.adoni-maropis.com. By the way, I have become a big ping pong player these days and found out that the players on the German National Team (#2 in the world behind China) yell my character’s name, Abu Fayed, from “24” when they hit a wicked or great shot—something to do with my wickedness in that role I suppose. Believe it or not, the German team was doing this before learning that I actually play ping pong. My second favorite of all time so far was portraying the arcade villain Quan Chi in the Mortal Kombat TV show. Waking up in the mornings and maintaining my deep-octave voice and causing havoc around the world while having 3 actual playboy bunny playmates as slaves to do my bidding was… well… fun to say the least. 😉

What are your future plans?
Well, my main aspiration is to do the script me and my dad wrote together. I believe when it is made into a movie that it will touch the world. It’s something that I believe needs to be seen and is hopefully one of… if not the only reason… I was put on this earth. I have been told that it is a powerful script. It takes place in Crete and is based around an awe-inspiring true incident that occurred during the Nazi occupation of Crete. It’s truly, a triumph of the spirit movie. If you are interested in reading the logline and preface, please go to www.adoni-maropis.com/script. I must say, the greatest achievement and glory of my life is our script which was an amazing labor of love to write with my Baba…my hero! ☺

Talk to us about your upcoming project.
If you go to my main website, you will see that I am all about fitness and ping pong. I have the Nationals coming up December 15 in Las Vegas and I have hopes of taking the National Championship title in Hardbat ping pong. We’ll see. Not sure if I should ask for your reader’s prayers or for them to pull out and unite the evil eyes against my foes—just kidding. I want to just play my best and hopefully an angel or two will guide me to victory. My mother always said, “better to be lucky than good.” Other than that I recently did a comedic role for Disney where I play an Oracle who lives in a cave of a volcano on an island run by identical 15 year old twin kings—one is black and the other white. My character is sort of like an ominous yet humorous Yule Brynner type. It won’t air till next April or May I believe—it’s the final episode of the season.

Would you like to start directing/producing?
I have always thought of directing our script because I see it so clearly. But I must admit, I try to minimize stress in my life. The thought of all the added stress that comes with directing and producing is not something I crave, especially being a Diabetic. We’ll see. The truth is, it would be great to find a passionate producer and director. Maybe through this venue, The Greek Reporter, it can happen. Stranger things have right? The script has gotten great reviews from a William Morris and CAA analyst (High Recommend), by the way. I know it’s more than just a good script.

What do you think of Greece as a film destination?
Well, our script MUST be filmed in Crete the way I see it. I guess you could film a bit on some other island. But it takes place in Crete and I have seen the places where I envision it being filmed. Again, it’s a movie written around an amazing event that took place during the German occupation of Crete in WWII. So, YES… I THINK Greece is the place for filming.