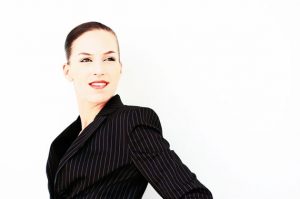 Natasha Tsakos, a Greek artist from Geneva, appears to bleed creative inspiration. Since the young age of 12, Tsakos has been romanced and educated by the wonders of theatre. Thankfully, at an early age she was introduced to Music, Opera, Ballet and Film which enabled her imagination to mature into an innovative masterpiece.

From television, film, voice dubbing, writing, teaching, to the near endless list of Tsakos’ accomplishments, it is very clear that this is a woman of ambition and success. She has 200 acting credits, written 12 original works, and directed 30 plays. She has also been commissioned by Nickelodeon, Miami Art Museum, Carnival Center, Art Basel, featured in HBO, MTV, BBC and is a member of Miami Performing Arts Center first theater troop, according to her online resume and countless positive reviews of her art.

In her most recent success, Tsakos performed a one-woman show supported by a beautiful visual interpretation of her moods on three LCD screens. She takes control of the performance through her character, Zero, who acts out a tragic and humane comedy in her  high-level production play, UpWake. A critically acclaimed performance by Tsakos is impressive enough, but it is also important to note that this also comes from the high-end theatre company ZERO llc productions, which Tsakos is also founder and president.

So what’s next for this Greek/Swedish/current Miami resident? After a whirlwind of success in 2009, whatever it is, it is sure to be something worth paying attention to.