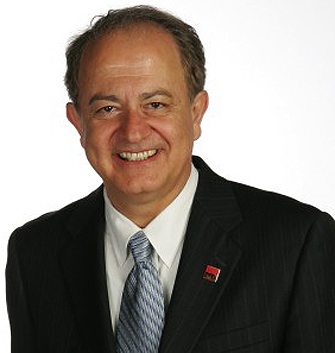 A Greek from Cyprus, Chrysostomos L. (“Max”) Nikias, will become the 11th president of the University of Southern California on August 3, 2010. His appointment was announced today by Edward P. Roski Jr., chairman of the USC Board of Trustees.

Over the course of his career as a researcher, educator and university administrator, Nikias has earned accolades for his leadership, innovation and fundraising, as well as his ability to build partnerships among varied constituencies.

Nikias’ selection by the Board of Trustees followed a search process that involved an advisory committee of trustees and senior faculty representatives, working with R. William Funk & Associates, one of the nation’s premier search consulting firms serving higher education. Between November 2009 and January 2010 the advisory committee met with 15 key USC constituent groups, including students, faculty, alumni leaders, community representatives, staff, and various university supporters and friends. After reviewing approximately 75 candidates, the committee interviewed seven finalists, all of whom were sitting presidents or provosts at major universities.

“It is a testament to Max Nikias’ abilities that, from such an impressive group of educators, he was unanimously recommended by the advisory committee,” Roski said. “During his 19 years as a faculty member and administrator at USC, he has provided distinguished service to the university in a variety of roles. He is a remarkable and inspiring leader, a brilliant scholar, and the best possible person to lead our university forward.”

President Sample praised the appointment: “I have long believed that Max Nikias is one of the country’s most talented provosts. I’m delighted to have a successor whose keen vision and energy will keep the university moving ahead at a rapid pace. USC will be in excellent hands with Max as president.”

“It is the greatest honor to be given this opportunity by USC’s Board of Trustees to work toward realizing the dreams and aspirations of the Trojan Family,” Nikias said. “The trustees have committed themselves wholeheartedly to continuing the historic, rapid ascent begun by Steve Sample — and even to accelerating USC’s momentum based on opportunities that lie before us.

“This incredible, wide-ranging university represents an electric environment, one remarkably skilled at producing new ideas and new leaders to strengthen our society. Moving USC forward, and accelerating its breathtaking momentum, strikes me as the most rewarding endeavor in American higher education today.”

Added Nikias: “For the next five months, of course, USC continues to be led by Steve Sample, who has been America’s most dynamic and successful university president. He and his wife, Kathryn, have left as their legacy a university that has attained global stature. The only proper way to honor this legacy is to take a great university and make it even greater.

“It has been said that the only sure way to predict the future is to invent it. And because USC’s faculty, students, alumni and staff comprise a global intellectual community of unsurpassed breadth, energy and dedication, I have exceeding confidence in USC’s own future. My wife, Niki, and I and our daughters love being a ‘Trojan family,’ and we love being a part of the greater Trojan Family. To be able, then, to lead this Trojan Family forward now is the opportunity of a lifetime, as we write together the next chapter in USC’s extraordinary history.”

After being named provost in 2005, Nikias worked with faculty and deans to develop a number of new programs to create a distinct academic environment at USC.

In order to enhance the undergraduate experience for USC students, he established new scholarship programs that reward innovative scholarship and global academic immersion, and sponsored a USC arts curriculum that encourages cross-arts interdisciplinary programs, including minors, progressive degrees, joint degrees and joint classes. He also drove the creation of USC’s groundbreaking Visions and Voices initiative in the arts and the humanities, which has drawn tens of thousands of undergraduates from all disciplines to a range of artistic and cultural programming.

Nikias launched other initiatives, including a quintupling of funding for Ph.D. fellowships, to $20 million per year; a grant program for advancing scholarship in the humanities and social sciences; and a program to recruit leading interdisciplinary scholars as Provost’s Professors.

He recruited new leadership to the Keck School of Medicine, spearheaded the integration of the school’s 19 Faculty Practice Plans, and oversaw the transfer of the University Hospital and Norris Cancer Center from Tenet Healthcare Corporation to USC.

Nikias was also instrumental in negotiating on behalf of the university the relocation of the Shoah Foundation — originally established by filmmaker and USC trustee Steven Spielberg — and the establishment of the USC Shoah Foundation Institute for Visual History and Education.

He established an Office of Research Advancement in Washington, D.C., which has been directly responsible for helping faculty win more than $140 million in federal research funding in the past 30 months.

Nikias is a member of the National Academy of Engineering and a fellow of the Institute of Electrical and Electronics Engineers, the California Council on Science and Technology and the American Association for the Advancement of Science. He is the recipient of the 2008 IEEE Simon Ramo Medal.

In April 2008, he was named inaugural holder of the Malcolm R. Currie Chair in Technology and the Humanities, USC’s first endowed faculty position honoring exceptional achievements in both realms. Each fall, he teaches an orientation-week seminar to incoming freshmen on the development of democracy and the dramatic arts within ancient Athens.

Nikias was recruited to USC in 1991 to develop a national-caliber center for multimedia research, and became the founding director and principal investigator for the Integrated Media Systems Center (IMSC). In a fierce competition in 1996, the IMSC proposal to NSF was ranked first out of 117, including proposals from America’s top-ranked research universities.

He served as dean of the USC Viterbi School of Engineering from 2001 to 2005. During a fundraising campaign that lasted less than four years, he secured a naming gift from Andrew J. and Erna Viterbi, as well as other gifts from major donors and institutions for individual academic departments and institutes. Nikias was the only dean in USC’s history to secure more than $200 million in such a brief period of time. Nikias recruited 30 world class faculty members to the USC Viterbi School and also tripled the number of women on the faculty.

He graduated with honors from the Famagusta Gymnasium, a school in Cyprus that emphasizes sciences, history and Greco-Roman classics. He received a diploma from the National Technical University of Athens, also known as National Metsovion Polytechnic, the oldest and most prestigious higher education institution of Greece. He earned M.S. and Ph.D. degrees from the State University of New York at Buffalo before holding faculty appointments at the University of Connecticut (1982-85) and Northeastern University (1985-91).

Nikias has been a high-level technical consultant to the department of defense, holding a security clearance for 15 years. He has authored more than 95 peer-reviewed journal articles, 180 refereed conference papers, three textbooks, and eight patents. Three of his publications received best paper awards.

He lives on the Palos Verdes Peninsula with his wife, Niki, and their two daughters, Georgiana and Maria, both of whom attend USC.