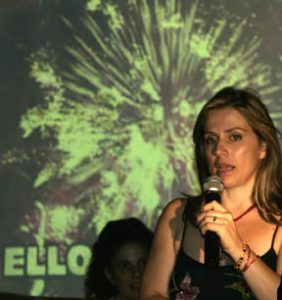 This year, Ellopia TV USA celebrates its 10th Anniversary as the premier broadcasting/electronic media outlet for the largest Hellenic American community outside of Greece and Cyprus. This milestone will be commemorated with a unique concert on Saturday, February 6th, 2010 at the Frank Sinatra School of the Arts at 35-12 35th Avenue in Astoria. This performance will feature musicians from the U.S.A., Greece, and Cyprus leading the audience on a musical odyssey representing the vibrant diversity of our culture.
Alexandros Hatzis, Anna Paidoussi and Tasso Papaioannou will perform at the concert along with the outstanding musicians from Greece and USA : Nikos Tatasopoulos (bouzouki soloist) Christos Rafailides (Vibes) Sergio Salvatore (pianist) Steve Hass (Drums) Petros Klampanis (Bass). Journalist and Congresswoman Mayia Tsokli will represent the Hellenic Parliament.

According to Hellenic mythology, Ellopas was the first Hellene; “Ellopia”, therefore, stands for Hellas/Greece. It’s an appropriate signifier, because Ellopia TV USA is an apt symbol of the largest Hellenic community outside Greece or Cyprus. From its facilities at the great Kaufman Astoria Studios, Ellopia TV USA helps unite and strengthen our community. Since 2000, Ellopia TV has offered varied, top-notch programming to help American audiences, readers and viewers explore and expand their appreciation of Hellenic culture. Journalist / Documentarian Athina Krikeli, its Founder and CEO, has traveled the world, leading the Ellopia team to cover news events great and small and to create stories and documentaries that have had a real impact.

Today Ellopia TV USA proudly marks a decade of serving the Hellenic American community. Beginning with an inspirational vision and persevering with hard work and determination, we have survived our humble origins to stand tall as the premier media outlet for our community. After filming 26 documentaries; founding a free monthly bilingual magazine “Ellopia Press” and broadcasting in 4 New York public channels; launching the first Hellenic web TV programming in the United States; hosting four not-for-profit concerts for the community we serve; and earning 4 Telly awards, 2 Emmy nominations, and 3 awards from Hellenic government; continues its journey.