GRNews
GreekReporter.comHollywoodCrossing Borders is a full time job for this Greek-Canadian Actress 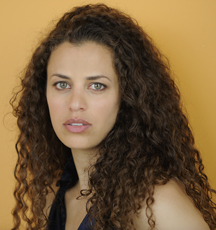 Up and coming Greek-Canadian actress Athena Karkanis, is making waves this season as the newest regular cast member, language-specialist Agent Khalida Massi for the third season of the hit Canadian based CBC TV drama, The Border. Relatively new to the acting scene, Karkanis has made a number of guest appearances on well-known shows such as The Best Years and The Chappelle Show as well as lent her voice to many animated series, including Growing up Creepy and Cartoon Network’s Odd Job Jack. Though probably most notably recognized here in the USA for her role as Agent Perez in Saw V and IV.

Raised in Toronto, this charismatic Greek gem has much to be thankful for at the ripe age of 28. After completing her undergraduate from McGill University with a BA in Political Science, Karkanis was planning on attending law school, but abandoned that path to pursue her passion for acting. As she told a reporter from MetroNews Canada, “Acting was something that I always liked, but I never really thought of it as a career choice”. This all changed after she was accepted into the notorious Circle in the Square Theatre School in New York. Her leap of faith turned out to be a fruitful endeavor, for in that moment Karkanis decided that she was on the right path.

This very talented actress is also a very well rounded person. She identifies herself to her Greek roots, but admits to only speaking a ‘little bit of Greek’.  Karkanis however, does speaks three languages fluently, French, Spanish, English and is currently being tutored in German. She dreams of the opportunity to one day test her skills working in European film. She is environmentally conscientious taking full advantage of reducing her carbon footprint she does not own a car and rides her bike all over the city of Toronto. An extremely versatile actress, she enjoys all the opportunities acting offers. After wrapping the third season of The Border at the end of October, she starred in the Toronto onstage production of That Face.

As for you Greek gentlemen out there, I hate to be the bearer of bad news, but this Greek goddess is temporarily taken. Only the fates know what is in store for this actress, but if Athena Karkanis’s passion, dedication and accomplishments are any indicators, we can only expect great things to come.