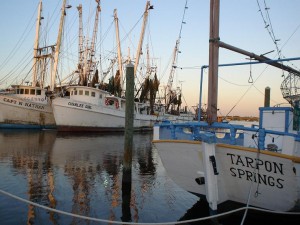 Tarpon Springs- a small city in Florida, is well known for two things: Sponges and the Epiphany. Both due to the town’s large Greek population. Tarpon Springs is notable for having the highest percentage of Greek-Americans of any city in the U.S. The first Greek immigrants arrived to this city during the 1880s, when they were hired to work as divers in the growing sponge harvesting industry. In 1905, John Cocoris introduced the technique of sponge diving to Tarpon Springs. Cocoris recruited Greek sponge divers from the Dodecanese Islands of Greece, particularly Kalymnos, Symi and Halki. The Greek divers led the 1930s to a very productive sponge industry in Tarpon Springs, generating millions of dollars annually. The 1953 film, Beneath the 12-Mile Reef, depicted sponge diving is set and was filmed in Tarpon Springs 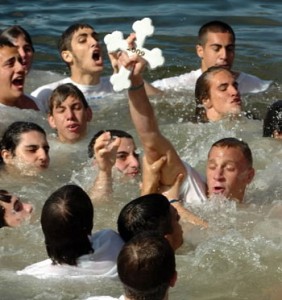 The Orthodox Christian celebrates Epiphany on January 6th of each year, in remembrance of the baptism of our Jesus Christ in the water of Jordan River. Following tradition, the Greek community established that January the 6th of each year will be celebrated with the sanctification of the waters and the immersion of the cross in the Spring bayou on “Cross Day” or “Epiphany”. The first observance of Epiphany in Tarpon Springs was celebrated by the first settlers in 1903, and was held in a Episcopal church which was attended by few people. As the news spread over the next few years throughout USA and Canada; devoted Greeks and Americans made the pilgrimage from all over the nation and Canada to take part in the celebration of Epiphany and its three-day festivities. This continues till this day.

On “Cross Day” the Archbishop would throw a golden cross into the water as the divers would leap into the waters in search of the cross. The diver who retrieves the cross would then climb onto the barge and kneel before the Archbishop and offer him the golden cross. At this time, the Archbishop would bless the young man and congratulate him.
For hundred of years, it has been said that whoever retrieves the cross would have good fortune and divine beneficence. Upon return to the church, the divers are asked to stand at the altar, while the retriever would receive special blessings. The successful diver with the rest of the boys would make the Epiphany rounds, as they visit the houses and businesses of the town. The people are allowed to kiss the cross, place flowered basil on the silver tray and give donations to the church. A portion of the money collected would be given to the boy who retrieved the cross.
After the ceremony at the bayou, the procession would return to the church, where bottles of water, which have been blessed earlier, would be distributed to the faithful, so that they could bless their homes with it. In the afternoon, the Archbishop and priests could go the waterfront where the Agiasmo (sanction of the waters) took place; they would then bless the boats. The Greek community believes unconditionally that a hurricane will not pass through the city of Tarpon Springs because St. Nicholas, which is patron saint and the protector of the seamen, will protect the city and its residents as well. The last hurricane, which passed through this city, was in 1920.

Following the closing of the religious services, the people would then gather at the Glendi festival area where they would eat, drink and dance. It would be an opportunity to meet old friends and make new ones. In the evening, many would attend the Epiphany ball.

For three days, the city of Tarpon Springs would celebrate Epiphany with dances, picnics, and theatrical plays that were provided by the societies, AHEPA and the Philoptochos.

Watch a YouTube video from Epiphany 2010 in Tarpon Springs: