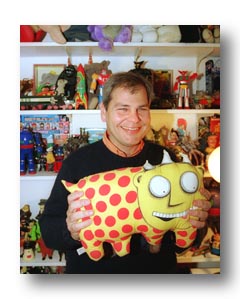 Michael Paraskevas  was always around the arts since his  mother worked with Broadway producer Harry Rigby  (Sugar Babies, Irene, No Nannett) when he was growing up. His mother always made it her business to bring Michael and his twin sister along to auditions and rehearsals.

She worked closely with Harry on a lot of shows. She was a strong supporter for Harry. The two of them were very good friends. “I remember a time when I was with my father picking up some frames in a shop and there was this sketchbook. I took one look at that and asked him if he would buy it for me. I thought I could fill that book with ideas and then, well for lack of a better word keep them close to me. It seemed like a nice orderly thing to do. I filled that book up with drawings and you know what? I still have it at our family home in New Jersey.”

At first Michael thought he would be a stage designer. But eventually he didn’t want to depend on such a large community of people to achieve that goal. Hence painting seemed to be a better way to go. Even though now he seems to be back at stage design with all the TV animation he is doing and the puppet show at www.thecheapshow.com.
Michael has been inspired by many artists like Gilbert Stone, Jack Potter, Robert Weaver, Sam Martine and Marshall Arisman. Marshall just happened to have taught him to just keep working at his craft and never give up.  Jack Potter was another wonderful teacher for drawing. Robert Weaver helped Michael to develop the plan for thinking of what to draw. Gilbert Stone was an exceptional teacher who seemed to be bigger than life for Michael. He was the most inspirational artist. “For those who knew him words really can’t describe what one learned from his classes. He taught me that the life of an artist was something special.”

Michel attended the School of Visual Arts a prestigious art college that offered the best in all that is art related. The idea that teachers were all working in the business made it very appealing for him. Michael could not be drawn to professors who just taught to make a living. He wanted ones that worked in the field. 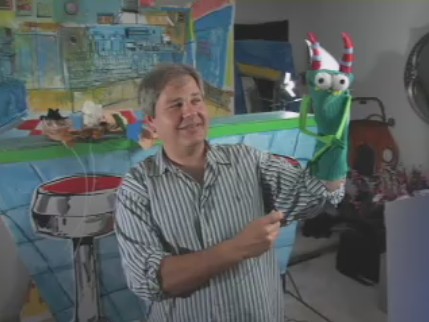 Michael’s mother turned out to be a very talented writer who ended up collaborating with him on many projects. “I always knew she was somewhat different than other mothers. First off she knew a lot more than any of the kids’ mother’s I use to play with. She just didn’t talk like them she was very well read. She was also a good judge of people.”

His mother’s background in theater was a big help to Michael. But her writing of dialogue was superb. Michael was illustrating for a few magazines yet he soon realized that combining their talents, more can be achieved. Hence he approached his mother with an idea of her penning a children’s book and he would illustrate it. Essentially they went on to complete 22 books, three TV shows and one animated special for ABC. Some of the books completed are as follows: The Ferocious Beast, Junior Kroll, The Tangerine Bear, and Shamlanders etc. One of the books also ended up to be adapted to animation for a show on Nick Jr. called “Maggie and the Ferocious Beast”.  Besides that “The Kids from Room 402” was also optioned to be animated but would hopefully be released on DVD with all 22 episodes. The writers on that project were Lisa Kite and Cindy Beagle.

Presently, they are shopping around another project called Leo “Spats” Ratcatcher which Fox showed some interest. Yet they are awaiting a response. In the meantime Michael and his mother were busy working on a show entitled The Cheap Show a puppet show along with a new animated series called Taffy Saltwater for Saban.
When it comes to comparing his work to anyone he tends to leave it to his critics. His work can be viewed at the web site  http://web.mac.com/jrkroll/Land_of_the_Lost_Socks/Gallery.html.  According to Michael children’s books are not in high demand as they use to be. “Not really. The business has changed. Harry Potter took care of that. Kids seem to grow up faster today and picture books like Hoppy and Joe are hard to get published. Today, it’s either very pre-school or Harry Potter young adult novel picture books. Almost every celebrity comes out with a book. An area they should keep out of.”

Michael admits that being part Greek has always seemed awkward to native Greeks who look at him differently. Yet he welcomes them with open arms. He has marketed the animated series “Maggie” in Greece. His books have been translated and are popular in countries like England and Ireland. His father is Greek and his mother German-Irish. Yet he recognizes his Greek roots wholeheartedly.