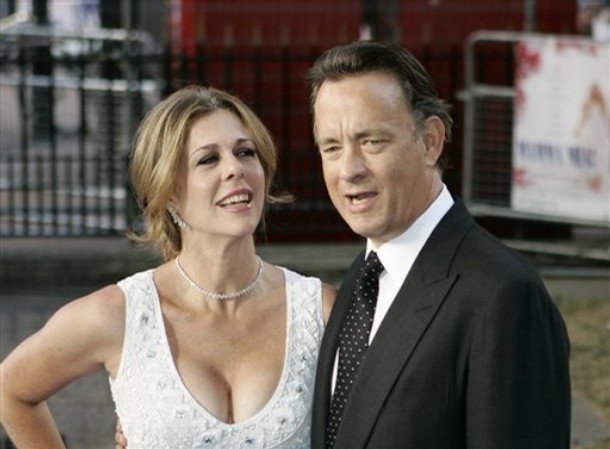 For the past two years, the honorary chairs and guest hosts of the annual L.A. Greek Festival at the Saint Sophia Cathedral in downtown Los Angeles have been none other than Tom Hanks and his wife, Rita Wilson. Rita and Tom have a personal connection with the church — they got married there and they baptized their children there. But do Hanks and Wilson sound like Greek names? As Tom Hanks joked at the 2008 L.A. Greek Fest, “Since I have an “S” at the end of my name, I am more Greek than my wife.” Well, maybe not…

Actually, Rita Wilson was born Margarita Ibrahimov in Los Angeles in 1956 to a Bulgarian father and Greek mother. When her parents emigrated to the U.S., they changed their last name to Wilson which was the name of the street they lived on. Rita attended Hollywood High School and went on to study at the London Academy of Music and Dramatic Art in England.

Thomas Jeffrey Hanks, also born in California in 1956, was raised Catholic. Tom acted in school plays while attending Skyline High School in Oakland, California. He got his big break on the television sitcom “Bosom Buddies” (1980-1982). Hanks moved into serious movie roles and won two academy awards for best actor two years in a row for Philadelphia (1993) and Forrest Gump (1994).

Tom and Rita first met when Rita appeared on one episode of “Bosom Buddies” in 1981, but they didn’t get to know each other until working on the set of the movie “Volunteers” in 1985. Tom divorced his first wife, Samantha Lewes, in 1987. He has two children from his first marriage, Colin and Elizabeth.

On April 30, 1988, Tom and Rita had their own big fat Greek wedding (it was Rita’s first marriage) at Saint Sophia Cathedral in Los Angeles. Hanks converted from Roman Catholicism to Eastern Orthodox Christianity. They have two sons, Chester and Truman. To celebrate their 10th wedding anniversary in 1998, Hanks and Wilson threw a Greek-themed party with a Greek band playing for 100 of their closest friends. Later that night, Hanks, who is a huge fan of ’60s rock and roll, hired a Beatles tribute band to play at the event.

In recent years, Tom and Rita have been involved in many Greek-themed movie projects. Hanks and Wilson were the producers of “My Big Fat Greek Wedding” (2002) which became the highest-grossing independent movie of all time, with over $200 million in revenue. Wilson is credited for securing the movie deal for the film’s writer and star, Nia Vardalos, after seeing Vardalos’ one-woman play of the same name in Los Angeles.

In an interview with Filmcritic.com in 2002, Nia Vardalos explained how important Hanks and Wilson were to the success of the movie: “Tom and Rita insisted on it to being Greek all the way. In fact, there was a scene where a character was wearing jeans and supposedly the family had just gotten back from church. Tom knew that no Greek Orthodox practitioner wears jeans to church, so he astutely made the appropriate changes that everyone else missed. So often the converts are more zealous than those born into the church.”

This year, Hanks and Wilson are both executive producers for the movie “Mamma Mia”, based on the widely successful musical featuring music by the Swedish group, ABBA. The movie, released in July, stars Meryl Streep and was filmed in Greece.

Hanks and Wilson are also the executive producers of an upcoming movie starring Nia Vardalos called “My Life in Ruins”, about a travel guide who rediscovers her romantic side on a trip around Greece, to be released in May 2009.

In addition to all the projects they are involved with behind the scenes, both Hanks and Wilson continue to appear in front of the camera as well. Tom Hanks has been filming “Angels and Demons” with director Ron Howard to be released in May 2009. Rita Wilson will appear in the movie “Old Dogs” which stars Robin Williams and John Travolta to be released in April 2009.

So, whether they are behind the scenes supporting a Greek-themed movie project or appearing in person at the Los Angeles Greek church, Tom Hanks and Rita Wilson are proof that the Greek community does have an ever-present voice in Hollywood.