Odysseus’ ship, which took him home from Corfu to Ithaka, turned to rock according to legend. Where might Odysseus have washed ashore in Corfu during his Odyssey?

Long before moving to Corfu, when I was a child growing up in a small American town in the mountains of Oregon, my mother had a modest bookshelf in our living room where she kept her favorite volumes beneath a romantic framed picture of a three-masted wooden ship under full sail.

One of her favorite books was by Richard Halliburton, a famous adventure travel writer during the 1920s and ‘30s, called The Glorious Adventure, which purported to retrace the path of Odysseus returning home from the Trojan War, as related in Homer’s Odyssey. 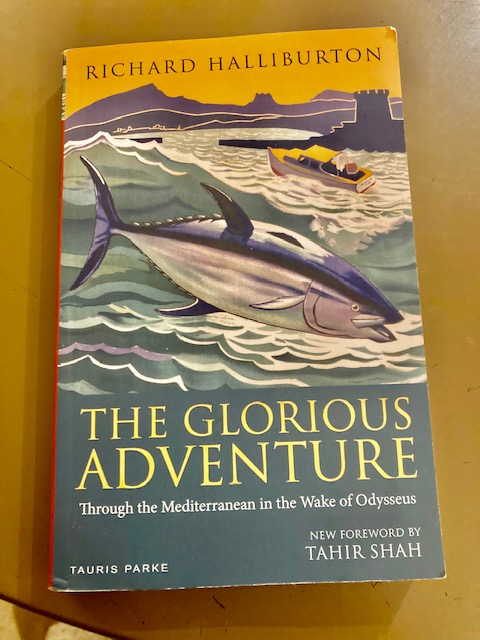 Near the end of his journey, Halliburton visited Corfu and motored across the island “under the endless olive groves” in a 1920 Ford to the western shore, where he believed Odysseus must have landed. Halliburton wrote:

“There we found glorious scenery — great five-hundred-foot cliffs stretching out of sight all along the coast, with a single brief interval where the walls relented and made room for a small bay, fringed with beach.”

Odysseus’ ship turned to rock in Corfu, according to legend

Here, along the dramatic coastline of modern Ermones and Paleokastritsa, the adventurer and his friends would have found the iconic Kolovri Rock, which local legend says is the ship that took Odysseus home to Ithaca, later turned to stone by the angry sea god, Poseidon.

Today, it shares this contested designation with Pontikonisi, or Mouse Island, on the eastern side of Corfu — with the actual roots of the myth being lost in the mists of time.

The homeward route of Odysseus in Homer’s Odyssey

The Trojan War itself may have been fought in the 11th or 12th century BC near what is now Hisarlik, Turkey, according to excavations by German archaeologist Heinrich Schliemann in 1868. He also dug in Mycenae on the Greek Peloponnese in his attempts to identify other places described by Homer.

And while most academic archaeologists may disagree with those who attempt to trace the homeward route of Odysseus without further evidence — namely artifacts extracted from the earth — others, including artists and writers, seem more willing to examine the Homeric text for geographical clues and to speculate. Many have done so, and no doubt others will continue.

The text of The Odyssey tells us that a deeply homesick Odysseus leaves the island of the goddess Calypso on a homemade raft, then is almost drowned in a storm sent by Poseidon, who is still angry that the clever Greek and his men had killed his son, the Cyclops Polyphemus, earlier in their journey.

Odysseus barely makes it to shore, where he finds a river that breaks the rocky coastline, and manages to crawl up beneath some olive trees, making a bed of leaves and falling asleep in a state of utter exhaustion.

He has come ashore in the land of the sea-faring Phaecians, as Homer’s tale would have it, which many identify as the island of Corfu, ruled by King Alcinous. The king’s daughter, Nausicaa, secretly urged by the goddess Athena — who has been aiding Odysseus — has come with her maids to wash their clothes in the flowing waters near the place where Odysseus has collapsed.

The happy shouts of the princess and her maids playing ball on the beach awaken the shipwrecked mariner and he emerges from the bushes, unkempt after twenty days at sea. He beholds the beautiful Nausicaa, praises her and asks for her mercy — as well as any items of clean clothing she might lend him — and to show him the way to her town.

She tells her maids, who are cowering in fear, that he is obviously in distress and that they must be kind to him. They clean him up, feed him and take him to town, where Odysseus presents himself at the court of King Alcinous and is welcomed with a banquet.

When the bard Demodocus sings of the wooden horse and the sacking of Troy, Odysseus cannot help but weep, which Alcinous notices and inquires after the source of such unhappiness. The revelation follows: “I am Odysseus, son of Laertes, renowned among mankind for all manner of subtlety, so that my fame ascends to heaven.” Having revealed his identity, Odysseus tells the king of his journey thus far, his tale unfolding over the next several chapters.

Nikos Dimitrios Mamalos, a historian, doctoral candidate and Corfu native, spoke to me about his island and Homer. “Some places in The Odyssey are completely mythical,” he allows, while others may be identified as places that would have been well known by ancient trading cultures, including “Naples, Sicily, North Africa, Malta, and other destinations around the Mediterranean.”

Coming from the isle of Calypso, he believes Corfu’s western coast near Ermones may have been the point of Odysseus’ arrival. “If you put the kingdom of Alcinous near Paleokastritsa, Angelokastro, the monastery, Ermones, those places are all connected,” he says.

Angelokastro is a Byzantine castle most likely built in the 11th century AD, while Paleokastritsa is a series of gorgeous blue bays tucked in between the towering rocky headlands of west Corfu, home to a monastery and museum that dates back to 1228.

You can easily imagine the beach of Ermones in Corfu, now a haven in the summer months for sun-and-sand worshipers from around Europe and beyond, as the place where The Odyssey says that Odysseus “came to the mouth of a river, and here he thought would be the best place, for there were no rocks, and it afforded shelter from the wind.”

There is a stream that tumbles down from the hillsides and empties into the sea at Ermones. The “small bay fringed with beach” of Halliburton’s description might also lead one to believe it is just where he and his friends re-enacted their scene of maids playing ball on the beach, although he never specifically identifies the location.

Halliburton and his friends followed this by recreating the banquet of King Alcinous with “pheasant from Albania and champagne from France,” he relates.

Halliburton himself later rowed a skiff out to the “petrified ship” of Mouse Island off the east coast, purposely ignoring the possible inconsistency that “the islet is on the opposite side of Corfu from the Homeric city,” because the “story is too sacred, and the island, beneath its ancient cypresses, too lovely.”

Halliburton was tragically lost at sea in 1939 while trying to cross the Pacific Ocean on a Chinese junk, no doubt jotting down each incident and adventure along the way.

Odysseus, The Odyssey tells us, had better luck along with the help of King Alcinous and his Phaecian ship, finally sailing home to his family on Ithaca, an island in the Ionian Sea to the south of Corfu.