GRNews
GreekReporter.comGreek NewsSociety2023 Is the Worst Year to Date in Mass Shootings for U.S.

The year 2023 has thus far been the worst year to date in terms of the number of mass shootings in the U.S. following the last killing spree in Half Moon Bay, California on Monday, when at least seven people were killed.

Dave Pine, San Mateo Board of Supervisors president, told CNN the suspect has been apprehended and is a 67-year-old man who lives in Half Moon Bay.

One shooting took place at a mushroom farm and another near a trucking facility, approximately two miles from the farm.

Deputies found four victims dead and one wounded upon arrival at the first location, and, soon after, three more dead victims were found at a separate site, San Mateo Sheriff Christina Corpus said at a news briefing.

This incident comes just two days after at least eleven people were killed in the mass shooting at a dance studio in Monterey Park, California.

California Gov. Gavin Newsom said he was meeting with victims of the mass shooting in Monterey Park when he was pulled away to be briefed on the shooting in Half Moon Bay.

“At the hospital meeting with victims of a mass shooting when I get pulled away to be briefed about another shooting,” Newsom said in a tweet. “This time in Half Moon Bay. Tragedy upon tragedy.”

There have now been thirty-eight mass shootings in the United States so far in 2023, according to the nonprofit organization Gun Violence Archive—more than there have been at this point in any year on record.

That’s more mass shootings in the month of January than in the previous five Januarys, dating back to 2018.

The Gun Violence Archive defines a mass shooting as an incident where four or more people are shot, not including the shooter. 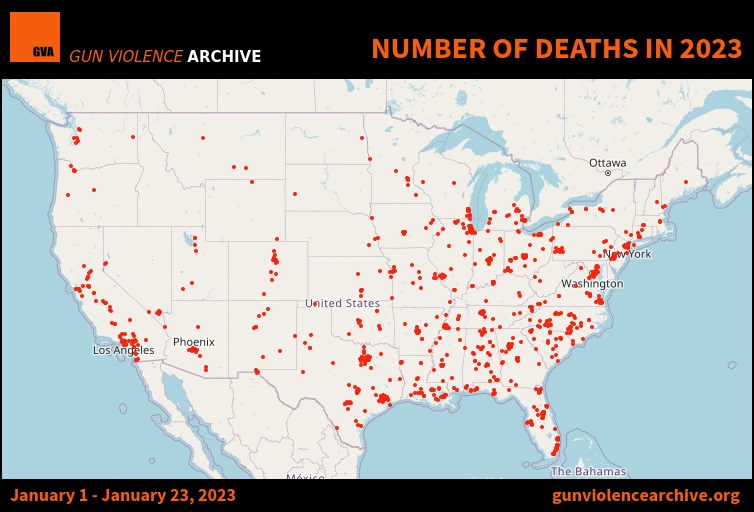 According to the Gun Violence Archive, the following is the list of mass shootings during which at least one person was killed since the beginning of the year.

As of December 28, 2022, 307 children under the age of twelve had been murdered, and 670 had been wounded by shootings—intentional or not—in the United States. There were 1,331 deaths and 3,734 injuries reported among teens ages twelve to seventeen.

The United States is the only country in the world where there are more civilian guns than there are people, according to the Small Arms Survey (SAS), a Swiss research project. SAS reports that there are 120 guns for every one hundred Americans.

After each mass shooting, the issue of gun control gets renewed attention in politics and the media. Last June, in response to the Uvalde massacre in May that killed nineteen children and two adults, President Biden signed into law a bipartisan gun reform bill, the most significant of its kind in decades.