GRNews
GreekReporter.comGreek NewsEducationGreece Has the Lowest Pupil-Teacher Ratio in Europe

Greece Has the Lowest Pupil-Teacher Ratio in Europe

Greece has the lowest pupil-teacher ratio in the European Union with an average of 8.7 pupils per teacher, according to a study recently published by the EU’s statistical body Eurostat.

On the other end of the spectrum, Romania possesses the highest pupil-teacher ratio (19.4). France and Czechia followed with ratios of 18.8 and 18.7, respectively. 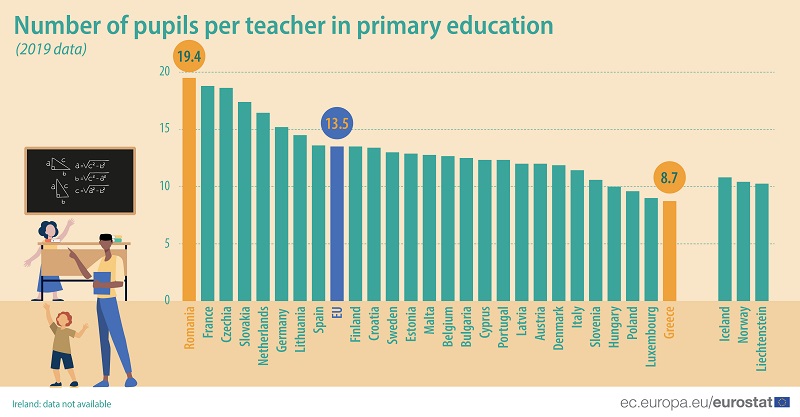 The pupil-teacher ratio should not be confused with average class size, as it does not take into account special cases such as small-sized groups of pupils with special needs and specific subject areas or the difference between the number of hours of teaching provided by teachers and the number of hours of instruction prescribed for pupils.

Eurostat says that in 2019, there were two million teachers (85 percent women, 15 percent men) and 24.5 million pupils at the primary education level in the EU Member States. Children usually enter primary school programs (classified as ISCED level 1) between the ages of five and seven.

These programs are designed to provide them a solid basic education in reading, writing, and mathematics along with an elementary understanding of other subjects, such as history, geography, natural and social sciences, art, and music.

Pupil-teacher ratio in Greece is small on remote islands

Perhaps, one of the reasons Greece has a low pupil-teacher ratio is because the country has schools in a lot of isolated places, such as the dozens of small islands, where in some cases, you have only a couple of pupils per teacher.

Greek Reporter recently featured the primary school on the remote island of Arkioi near Patmos, where the school has a single pupil, Christos.

The student is taught by one teacher, Maria-Faidra Tsialera, who requested to be transferred to the island although she was brought up in Greece’s second-largest city, Thessaloniki.

She makes it possible for Christos to be able to stay on the island year-round and receive the normal education to which all Greek children are entitled.

The remote, yet stunningly lovely island has only thirty-five year-round inhabitants. Tsialera was recently honored by the Academy of Athens for her dedication and professionalism, as she carries out her job teaching each of the subjects Christos studies.