Seikilo is a unique exhibition of ancient musical instruments featuring the ancient Greek lyre in the heart of Thessaloniki. It offers interactive and online tours for visitors, students, and educational institutions.

The creation of the exhibition center was inspired and continues to be fueled by one family’s passionate love of music. Creating and playing ancient musical instruments began as a hobby and has mushroomed into a family business venture and a shared community project, according to Theodoros Koumartzis, communications director for Seikilo.

Seikilo has the intent to “bring everyone close to the music,” according to Koumartzis. The space is not just an exhibition of recreated ancient musical instruments. It is a hands-on, interactive experience where the visitor has the opportunity to touch and play the instruments in performance mode.

Visitors can experiment with the sounds the lyre produces. If they like what they hear, online lessons are available for anyone who wants to take the time to improve their musical technique. There is even the opportunity for small groups to participate in a live concert, replicating a bit of antiquity.

Seikilo also offers the opportunity to play and extend learning on the frame drum, known as the tympanon, used in ancient worship rituals.

The exhibition was shuttered, as were most such spaces in Greece, during the lockdowns to curb the pandemic. “With COVID-19 revamping our external lives during these last 15 months, it was an opportunity to explore our need to develop internally,” said Koumartzis.

“We had planned to launch online lessons for the ancient lyre, but 2020 pushed us to have the online course up and running by May. Now, from anywhere in the world, you can learn to play the ancient lyre with the online instruction we offer,” Koumartzis said. 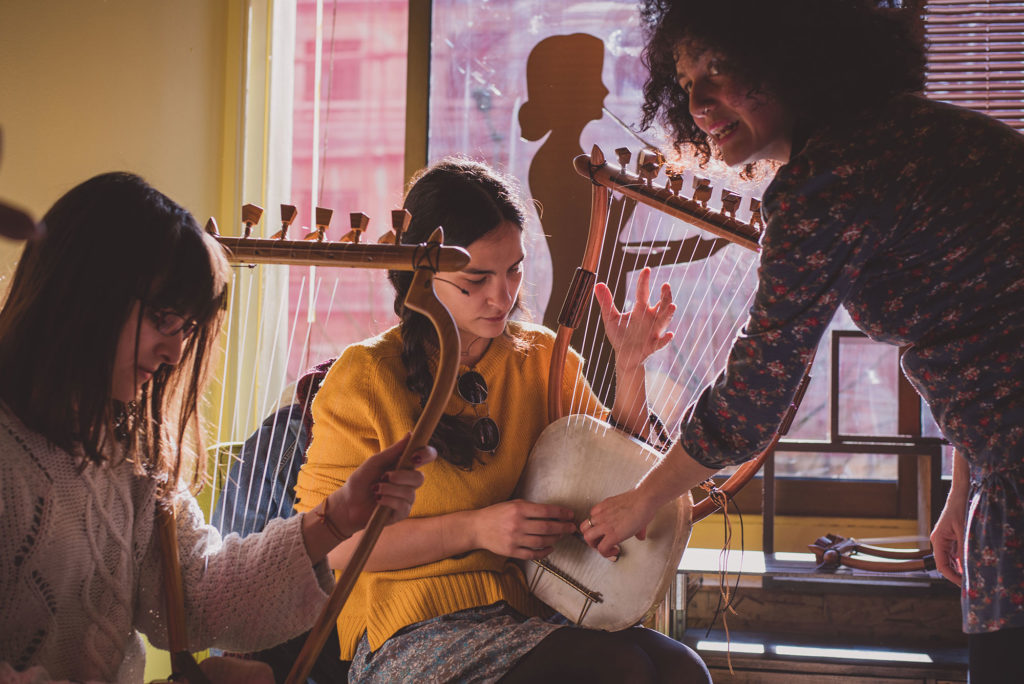 Lina Palera, lyrist, instructs visitors at Seikilo. Credit: https://seikilo.com/Koumartzis said that keeping the ancient instruments alive is a combination of projects like Seikilo  and interactive experiences but also an effort of combining ancient and modern instruments in musical performance medley for today’s listeners.

The discerning listener is impacted by the strong resonance and full sound that the delicate instrument is able to produce. The musical sound is at once haunting and magnetic as it seems to reach deep back into the memory of human soul.

“We also run our Youtube channel with uploads three times a week with videos featuring  ancient Greek musical instruments,” said Koumartzis. “We collaborate with many artists including Lina Palera, Thanasis Kleopas, Nikos Xanthoulis and musicians that visit us from all over the world.”

Theodoros Koumartzis performs on the ancient lyre with the vocals of Greek soprano Aphrodite Patoulidou at the exhibition center in Thessaloniki.

An amateur musician for four decades and a retired veterinarian, Anastasios Koumartzis began tinkering with instrument making. When his middle son, Nikolaos, focused on the ancient lyre. for the needs of his master thesis at the Hellenic University of Thessaloniki, his father soon realized that he shared the same level of passion for the  ancient musical heritage.

Theodoros and Jordan joined them in a shared endeavor.vWorking closely together for several years, they have managed to handcraft a series of premium ancient musical instruments and exhibit them across Europe in music festivals and trade fairs.

Theodoros told Greek Reporter he remembers waking on Saturday mornings to the sounds of his father playing the piano in the living room. The family would “jam” as the three brothers joined Anastasios in impromptu performance.

The family’s musical vocation initially transformed into “Luthieros.” A private company based in a small village outside of Thessaloniki, the family prefers to say it ‘creates’ rather than “builds, constructs, [or] produces” since these words are too industrial to capture an act of love that occurs within this family business of ancient Greek musical lyres.

Even the choice of names for both the business producing instruments and the interactive center demonstrate the family’s passion for Greece’s musical legacy and the importance of culture.

Most founders unabashedly baptize their creations with their own names. The Koumartzis clan reached back to the roots of Greece in choosing the names Seikilo for the museum and Luthieros for the instrument company.

The exhibition center of ancient musical instruments takes its name from the oldest complete musical composition in existence, the “Song of Seikilo,” performed using the ancient Greek lyre.

Koumartzis, the communications officer for Seikilo, said that choosing the name for the exhibition center was easy. “We have hope for tomorrow because of the deep meaning of the lyrics of the ‘Song of Seikilo.’ We like to dream, as well, so we created a special multi-space of culture, music and expression in Thessaloniki.

The haunting “Song of Sekilos” was engraved on a tombstone in the town of Tralles near contemporary Aydin in Turkey.

have no grief at all
life exists only for a short while
and time demands an end.

The engraving is signed from Seikilos to Euterpe, who was probably his wife.

The inscription includes signs and symbols to indicate the melody, and modern musicologists have transcribed the music into modern notation.

The tombstone, or stele, was discovered in 1883 but then disappeared and was later rediscovered being used as a pedestal for a flowerpot. It is now housed in the National Museum of Denmark.

“Lutherie” is the art of making stringed musical instruments. The first known use of the term dates back to 1879, with French etymology from the term ‘lut.’” Honoring the craft, the Koumartzis family launched Luthieros in Evropos, Kilkis, their ancestral village and hometown located north of Thessalonikli.

Seikilo, just off the Aristotelis square in Thessaloniki, hosts a permanent exhibition of Greek musical instruments from antiquity to the present day. “It serves as a meeting place for musicians and friends, where many collaborations were born and are being created with the sole aim of producing culture,” Koumartzis said.

Koumartzis told Greek Reporter “We are a niche music brand, with a declared love for ancient-inspired musical instruments, and we yearn to keep it this way. Music is a means  for people to communicate, and so we focus on providing the right ‘tools’ to make that happen.”

The members of the Koumartzis family have always been meticulous craftsmen, with a special love for natural materials and a goal to give them a new reason to exist.  By recreating the ancient Greek lyre and other instruments, they become something that can produce sounds and music to evoke strong emotions and help individuals to explore the inexhaustible creativity of the human species.

“We focused on the handmade construction of ancient musical instruments such as the ancient lyre of Hermes, as well as traditional ones such as the bouzouki, the tzouras, and the baglamas,” said Koumartzis.

“Our musical instruments travel literally around the globe,” said Koumartzis. The family-based company’s vision is “to provide employment to our small community, especially following the harsh years of Greek financial recession.”

Seventy percent of the instruments are sent to customers in the US, UK, and Japan, and sourcing materials to create the ancient instruments has been a challenge to benefit the environment. The Koumartzis family actually search for wood to use for the hull of instruments in the wild along with sourcing from lumber suppliers. Tree trunks that are in good condition and appropriate in terms of what the ancients used are selected in an effort to remain authentic in the creation of the instrument.

Today, in an effort to be bio-friendly, Luthieros uses the reed of sugar cane for the strings rather than nylon, and the switching from leather to other materials that do not result in the harm or abuse of animals for other parts is also being considered.

The Koumartzis family shares and specializes in their interests and duties with instrument creation and Seikilo.

Anastasios is a self-taught musician and a modern-day Daedalus. For many decades, the art of lutherie has been his primary passion. He combines his inner talent for everyday inventions with his love for music.

Unlike the mythical architect who created wings for his son to fly, Koumartzis offspring do not perish in a fiery heap but instead nurture and further grow their father’s vocation into a business, a community project, and educational institution.

Along with his wife, Eleni, Anastasios founded the Musical Cultural Society Evropos creating musical opportunity for the community for instruction and performance in music, song, and traditional dance.

He has authored Do-It-Yourself books about the art of lutherie, published both in Greek and English. Unlike others who have developed the craft of instrument making, he was of the mind to share the long-guarded techniques of other instrument masters, believing that sharing knowledge was a duty in producing the best music.

Jordan, the oldest brother of the Koumartzis family, is a professional musician and contrabass player. He studied at Middlesex University in the UK and has traveled extensively, performing in Greece, Germany, UK, Singapore, and Cyprus. He shares his musical knowledge by offering lessons for the lyre and the contrabass.

Nikolaos, the second son of the family, has extensive studies in computer science, publishing, and product design and has earned a doctoral degree in Journalism from Aristotle University of Thessaloniki. He has authored seven books and published in professional journals for journalism and ancient music research.

Nikolaos is the co-founder of three publishing houses that include the Seikilo Museum of Ancient Musical Instruments in Thessaloniki, Luthieros  Musical Instruments, and The Lyre Academy. At Luthieros, he is responsible for product range development, brand identity, web presence, and YouTube Channel content featuring the ancient Greek lyre.

Communications director Theodoros, earned a BA in computer science and a masters in online education. He founded two bands, the “Reggetiko Project,” and “Pausis Project.” The youngest member of the Koumartzis family, he travels extensively to promote the ancient Greek lyre with live performances throughout Greece, Cyprus, Turkey, Italy, Germany, Singapore, and the UK.

Koumartzis added that the mythical god Hermes did not receive due credit for his contribution, as it was he who fashioned the seven string lyre of myth that mesmerized Apollo. Dedicated to music and art, the Greek god Apollo initially had a three-stringed lyre.

The myth goes that as a mere babe, Hermes encountered an unfortunate tortoise. He seized and cut up the tortoise and used the hollow shell along with reeds, an ox’s hide and strings of sheep gut, to produce the first ancient Greek, seven-stringed lyre. He tuned the lyre and sang beautiful songs in honor of his parents.

Apollo was enthralled and exclaimed that this enchanting skill was worth fifty cows! He promised that Hermes would become the messenger of the gods and that he and his mother would be renowned among the immortals. Hermes gave the lyre to Apollo ordaining that he should become a master of  music and art. Apollo, in turn, gave Hermes a shining whip and put him in charge of cattle herds.

“We love to ‘share.’ Whether it is music, or song, or know-how, or pleasant moments, or a party between friends…We love to ‘give,’ [and] initially, we faced opposition, for wanting to divulge the seven-sealed secrets in the community of instrument makers, so we decided to share our knowledge everywhere,” said Koumartzis.