Dean Spanos, owner and chairman of the Los Angeles Chargers, will receive the Inspiration Award by the Loukoumi Make A Difference Foundation at an event to be held on Friday, June 17th.

Held at the Lake Isle Country Club in Eastchester NY, Spanos, who has led the team through numerous franchise records and victories will be presented the award together with eleven Make A Difference Awards to students and youth organizations who are changing the world.

The Loukoumi Make A Difference Foundation

The Loukoumi Make A Difference Foundation encourages children and young adults to make a difference in their own lives by following their career dreams. It helps them by paying forward their talents through community service projects that mean something to them—all while having fun in the process.

Under the leadership of President Nick Katsoris and Vice President Voula Katsoris, the Loukoumi Make A Difference Foundation encourages more than 100,000 children and young adults each year to undertake good deeds founded upon the principles of—pride in self, pride in family, pride in the community and doing the right thing. 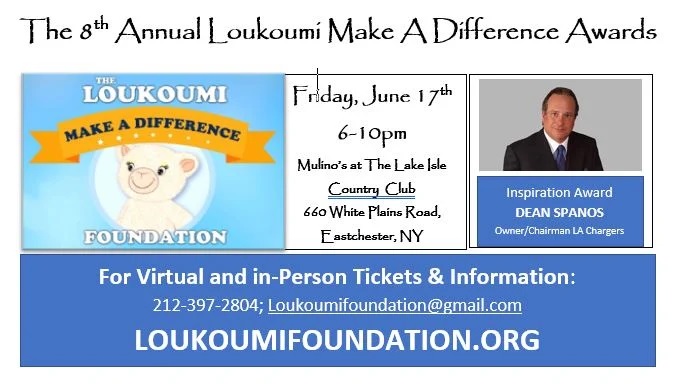 The Foundation is now celebrating its eighth annual Make A Difference Awards. For virtual and in-person tickets and information, please follow this link.

Spanos, raised in Stockton, California, is the son of Alex Spanos and Faye Papafaklis, both of Greek ancestry.

He had served as President of the Chargers since early in 1994, the same year the team culminated its most memorable season with an appearance in Super Bowl XXIX.

Dean and father, Alex Spanos, also secured Super Bowl XXXII (1998) and Super Bowl XXXVII (2003) for their community with each event bringing an estimated windfall of more than $300 million to the local economy.

In 2015, Spanos handed over the reins of day-to-day leadership to sons A.G. and John. Eldest son A.G. Spanos now serves as President-Business Operations while John Spanos is President-Football Operations.

Spanos’s leadership is also present throughout the National Football League. As a member of the NFL’s Management Council Executive Committee (CEC), he played an integral role in negotiating the NFL’s current labor agreement.

Spanos also serves as President of the A.G. Spanos Companies, and along with his brother, Michael, oversees all construction operations nationwide.

The Spanos family and the tradition of giving

The Spanos family has a multi-generation commitment to community involvement and is recognized as one of the NFL’s most philanthropic families and one of Southern California’s most active and caring contributors to local causes.

Their financial and emotional support for youth, sports, education, and our brave men and women in uniform has been a hallmark of their team ownership and legacy.

In 1995, the Spanos family created The Chargers Impact Fund, which has since provided nearly $13 million to support a wide range of services and programs directly benefiting children and families.

The generosity of the Spanos family is felt throughout California. When wildfires ravaged San Diego County in 2003 and again in 2007, the family made identical $1 million donations to aid affected families and the recovery effort.

In 2010, the Association of Fundraising Professionals recognized the generosity of the family and Chargers organization when they were both named as San Diego’s Outstanding Philanthropic Corporation, one of the most prestigious awards for community service.

In 2012, following the passing of former Chargers linebacker Junior Seau, Dean and his wife Susie brought a shocked team and community together when they hosted a “Celebration of Life” for Seau. The event was seen and heard live by more than 150,000 fans and made it possible for a grieving community to heal and pay tribute to its native son.

In 2014, Spanos pledged $500,000 to the University of California-San Diego to upgrade and expand the existing Alex G. Spanos Training Facility, which was then renamed and opened as the Alex G. Spanos Athletic Performance Center. UCSD is the Chargers’ former training camp home and this gift raised the value of the family’s support of the institution to more than $1.6 million.

Spanos is also known for his generous backing of youth and high school football and, in 2015, he and the Chargers were honored by National Pop Warner with its prestigious NFL Team of the Year Award—in recognition of the team’s outstanding support for youth football and cheer at all levels. The Chargers, who were also honored in 2007, are the only NFL team to be so honored twice.

Spanos has also been a long-time contributor to many other important charities and organizations working to improve the lives of children and families.

In June of 2018, Los Angeles Mayor Eric Garcetti kicked off the second decade of Summer Night Lights (SNL) by announcing Spanos and the Chargers’ three-year, $1.2 million commitment to the program—which keeps 32 parks across the region open between the hours of 7 pm to 11 pm by adding extended programming during the summer.

Targeting communities at risk for gang violence, SNL locations saw a 46 percent decrease in gang-related crimes from 2016 to 2017. The Chargers’ funding will expand sports programming across all 32 locations, including uniforms for participants, referees, and increased access to sports clinics, while ensuring it remains free for all participants.