The anise-flavored drink Ouzo is deeply connected with the nation of Greece. It is simply the spirit of Greek summer which no one can copy.

It’s probably the most social drink ever distilled. Those who share this particular flavor, come closer and speak more easily. Ouzo is the drink of companionship and confession.

Ouzo drinking is an art. Or maybe it’s a way of life, says Matt Barrett, an American who writes about Greece. However, it’s not the ouzo but, rather, who you drink it with that really makes the experience, he adds.

When Greeks say “Let’s go for a little ouzo,” this is not only an important social invitation but also a culinary pleasure that is rarely turned down.

Ouzo conjures up many images but the most common one is a picture of sitting at a seaside taverna as the summertime sun is glowing red and setting over the Aegean Sea.

A carafe of ouzo sits next to a bowl of ice on the table along with several small plates of grilled octopus, fried calamari, small fish in brine, fresh cucumbers and tomatoes, rich feta cheese, and plump olives among other Greek delicacies.

The name “ouzo” has been patented as a Greek alcoholic beverage since 1989, meaning a beverage may be produced using the specified method and named ‘ouzo’ only in Greece. Some locations with a long tradition of distilling ouzo are Tirnavos and Kalamata.

But the most popular of all is definitely the island of Lesvos with the ouzo from Plomari being the best example.

Its production demands special skills; part of it is produced by the distillation of the skins of grapes after wine is produced, but a larger part is water flavored with various aromatic herbs of which aniseed prevails.

In Greece, ouzo is popular during Lent (Sarakosti), and of course, throughout the summer.
Literary scholars believe the name ouzo originated from the ancient Greek verb “to smell,” or “ozo.” However, romantics prefer to think it comes from the phrase “Ou zo,” or “Without this I can’t live.”

Others see its roots are in the Turkish word for grape, “uzum” while others believe it can be traced back to a story about a Turkish consulate doctor in Thessaly in the 18th century who tasted the local raki and cried out, “But this is Uso di Marsiglia!”

The phrase, meaning “For use in Marseilles,” was at the time stamped on crates of silk worm cocoons exported from Thessaly to major merchants in the French port, which had become synonymous with any product of excellent quality.

Whatever its origin, it serves as a very welcome reminder, perhaps most of all this year, of the way summer should be.

The perfect place to enjoy a good ouzo

In modern Greece, ouzeries (the suffix -erie is imported from French, like in Boulangerie or Pâtisserie) can be found in nearly all cities, towns, and villages.

These café-like establishments serve ouzo with mezedes, or appetizers, such as octopus, salad, sardines, calamari, fried zucchini, and clams among others. Traditionally, it is sipped slowly (usually mixed with water or ice) together with mezedes shared with others over a period of several hours in the early evening.

In other countries, it is tradition to have ouzo in authentic Greek restaurants as an aperitif served in a shot glass and deeply chilled before the meal has begun. No water or ice is added, but the drink is served cold enough so that some crystals form in the drink as it is served. 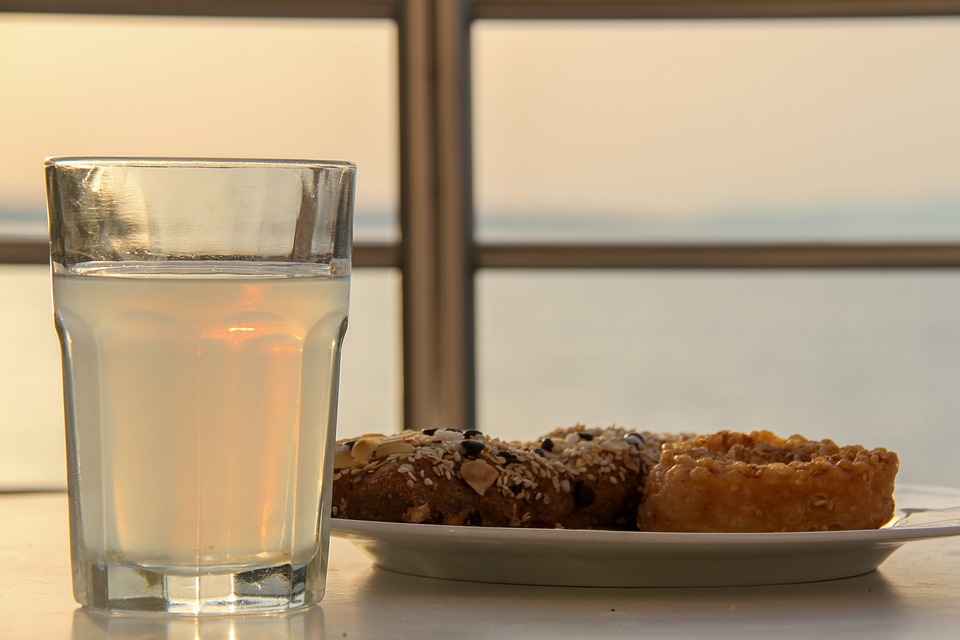 Ouzo can colloquially be referred to as a particularly strong drink, the cause of this being its sugar content.

Sugar delays ethanol absorption in the stomach, and may thus mislead drinkers into thinking that they can drink more as they do not feel tipsy early on.

The cumulative effect of ethanol then appears, and the drinker becomes inebriated rather quickly. This is why it is generally considered poor form to drink ouzo “dry hammer” (“ξεροσφύρι”, xerosfýri, an idiomatic expression that means “drinking alcohol without eating anything”) in Greece.

The presence of food, especially fats or oils, in the upper digestive system prolongs the absorption of ethanol and ameliorates alcohol intoxication.