Greece remains the top shipping nation in the world, as Greek shipowners with 5,514 ships currently control approximately 21 percent of the global fleet, in terms of capacity, the Union of Greek Shipowners (USG) announced in its annual report on Thursday.

According to the report, the total capacity of the Greek-owned fleet has increased by 45.8 percent compared to 2014 while even during the COVID-19 pandemic, i.e., since 2019, capacity rose by 7.4 percent. 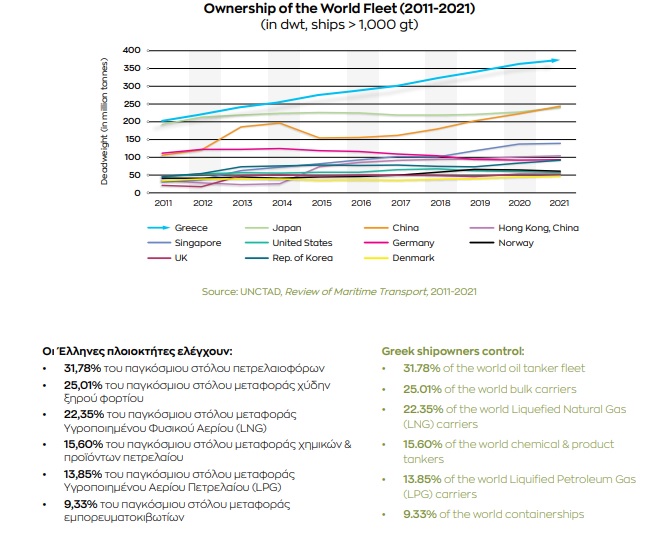 The Greek-owned merchant fleet, which represents 59 percent of the European Union (EU)-controlled fleet, transports cargoes between third countries with more than 98 percent of its fleet capacity, thus being the world’s largest cross trader.

USG says that Greek shipping is predominantly engaged in bulk/tramp shipping, which is a truly entrepreneurial sector that maintains characteristics of perfect competition: a very large number of private, mainly small and medium-sized enterprises, compete globally for business.

According to the report, Greek shipowners are constantly investing in new, energy-efficient ships and in environmentally-friendly equipment with the average age of the Greek-owned fleet (9.99 years) being lower than the global average (10.28 years).

Newbuilding orders from Greek shipowners amount to 173 ships (from 104 ships the year before), corresponding to 17.3 million dwt3. More than one-third of oil tankers and almost one out of six LNG carriers currently being built in the world will be delivered to Greek shipowners, it is claimed in the report.

Greek shipping in an era of energy security concerns

The report asserts that as the EU’s energy security concerns are on the rise, Greek shipping, and particularly its coal carriers, oil tankers, product tankers, and LNG/LPG carriers, are strategically important.

“The Greek-owned fleet secures and allows for diverse sources of energy and other essential goods imports into the EU from remote regions of the world, thereby facilitating its need to reduce its dependency on a limited number of countries,” it is written.

Melina Travlos, who recently became the first female president of USG, said that in the volatile global environment, “shipping has been functioning as a beacon of stability, responding to the unprecedented conditions we have been facing in the last two years due to the international health crisis, as well as due to the geopolitical crisis of recent months in Europe.”

She added that Greek shipping “has a responsibility to undertake and support initiatives in order to inform and enlighten the wider public about the strategic importance of the industry and the need for its prioritization by the political leaders worldwide.”

Travlos, who runs vehicle carrier owner and operator Neptune Lines, as well as a dry bulk outfit, Neptune Dry Management, has succeeded (beginning in February) Theodore Veniamis who had been at the helm for thirteen years.

After her election, Travlos said: “We have many great challenges ahead of us. We need to move forward united and focused on our goal. A national goal, a global goal: to defend the achievements of Greek shipping.”