Ukraine’s foreign minister, Dmytro Kuleba, advised anyone going to the talks with Russia on Tuesday “not to eat or drink anything and preferably avoid touching any surface.”

He was speaking before the start of the new round of talks between delegations from Russia and Ukraine in Istanbul.

The warning came after the suspected poisoning of Russian billionaire Roman Abramovich and Ukrainian negotiators earlier this month at peace talks on the Ukraine-Belarus border.

Abramovich was spotted inside the Istanbul talks sitting at a table alongside Ibrahim Kalin, a spokesman for President Erdogan, and is wearing translation headphones. 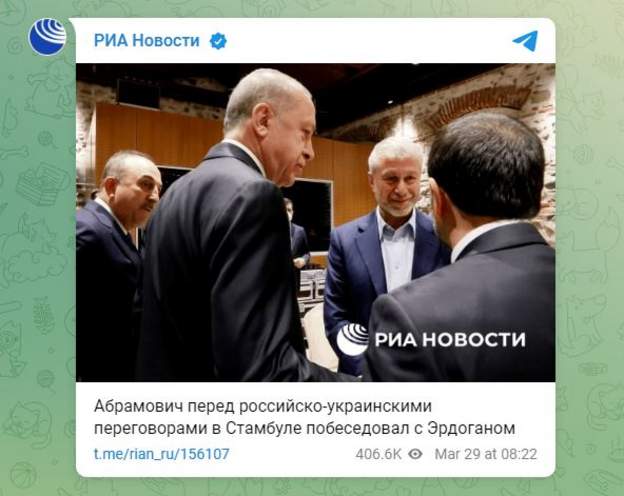 Although he’s not at the main table of the Russian and Ukrainian delegations, his presence suggests he’s still involved to some level in the mediation attempts.

“These reports are certainly not true,” he added.

Peskov also said that Abramovich was not an official member of the Russian delegation,but was involved in ensuring “certain contacts” between Moscow and Kyiv, the agency reported.

Abramovich’s efforts have been approved by both sides, Peskov reportedly said.

There is some skepticism about the alleged poisoning, and an unnamed US official was quoted by Reuters as saying that intelligence suggested the men’s symptoms were due to “environmental” factors rather than poisoning.

Erdogan says delegations have a “historic responsibility” to stop the war

Turkish President Recep Tayyip Erdogan has told the Ukrainian and Russian delegations that they have a “historic responsibility” to stop the war.

“We believe that there will be no losers in a just peace. Prolonging the conflict is not in anyone’s interest,” Erdogan said as he greeted the officials, who were seated on opposite sides of a long table.

“It is in the hands of both sides to stop this tragedy,” he added.

Erdogan also told both sides they had “legitimate concerns” but said there was a need for “concrete results” from the discussions and called for an immediate ceasefire.

Ukraine’s President Volodymyr Zelensky said on Sunday that he is prepared to discuss the adoption of the status of neutrality as part of a peace deal with Russia.

Zelensky told independent Russian journalists that “security guarantees and neutrality, the non-nuclear status of our state” is what “We are ready to go for….”

However, he added that the proposal would have to go to a referendum and be guaranteed by third parties.

Zelensky said Ukraine refused to discuss certain other Russian demands, such as the demilitarization of the country.

Speaking more than a month after Russia invaded Ukraine on February 24, Zelensky said no peace deal would be possible without a ceasefire and troop withdrawals.