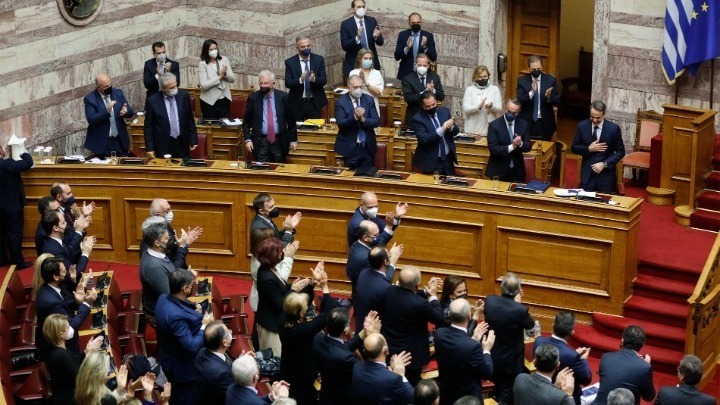 The Greek government survived on Sunday a censure motion on the handling of the emergency following the recent snowstorm that paralyzed Athens and trapped thousands of drivers in their cars for hours.

The censure motion was tabled by the main opposition SYRIZA and was supported by other opposition parties.

The three-day debate in the Greek Parliament was a highly polarized event that went beyond the snowstorm fiasco, with the opposition using the opportunity to blast the conservative government of Kyriakos Mitsotakis on several fronts.

Three days of discussion had proved “how justified were the waves of outrage and anger that swept through Greek society,” main opposition SYRIZA-Progressive Alliance leader Alexis Tsipras said in Parliament on Sunday, accusing the government of failing “with a huge social, economic and human cost.”

Addressing Mitsotakis, Tsipras accused him of acting “as though you believe your own propaganda,” while adding that the citizens were now “immune to it.” He accused the Prime Minister of “living in a glass bubble” protected by “flatterers.”

“It is time someone told you what is really happening in Greek society. Mr. Mitsotakis, you are finished politically but the worst thing is that you are living in your own parallel universe where everything is going well because it is presented as going well by the mainstream media,” Tsipras said.

“You are finished, not only because you failed with huge human, economic and social costs in nearly all the crucial issues you handled. In the pandemic, the fires, high prices, the recent snow…but chiefly because at a time when you are failing resoundingly in everything…you continue in a provocative way to believe that you are not a prime minister who must be held accountable but a prince for whom power is a hereditary right,” Tsipras added.

On his part, Mitsotakis claimed that the censure motion was a “desperate attempt” by the main opposition leader to “staunch wounds within his own party.”

“You have announced, Mr. Tsipras, that I am finished politically. I imagine this forecast is as accurate as when you said that there was not a chance in a million that Mitsotakis will win the elections,” the Prime Minister said.

He accused Tsipras of “doing what he knows how to do well, distorting the truth,” while adding that the main opposition leader had outdone himself during his speech in parliament, “(with) two lies in every sentence.”

Responding to the main opposition’s call for early elections, Mitsotakis said that SYRIZA had not yet examined any of the mistakes of its government nor changed any members of the leadership team that the Greek people had rejected at the last elections.

The New Democracy government, he added, has faced unprecedented crises, such as the global pandemic, the secondary energy crisis, extreme weather phenomena, earthquakes, heatwaves and the “hybrid attack on our country in Evros and the events in the Eastern Mediterranean.”

“We can say that we managed to get through these (crises) with the least casualties,” the Prime Minister said.