NBA MVP Milwaukee Buck Giannis Antetokounmpo became a proud dad for a second time to a baby boy, a little more than a month before the NBA season kicks off.

The “Greek Freak” shared a photo on social media on Tuesday holding Liam Charles, who was born in February 2020, and the new arrival with the caption: “Love my boys.” 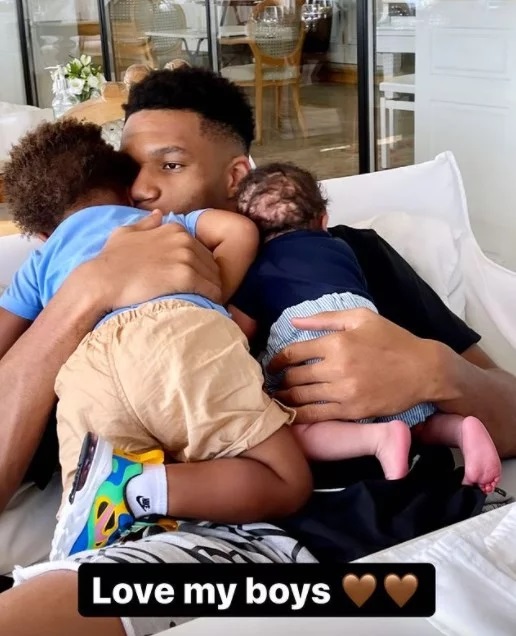 Antetokounmpo did not reveal the name of his second child nor the date of his birth.

In late August, Antetokounmpo and his girlfriend, Mariah Riddlesprigger, were spotted exiting a store at Mayfair Mall and a baby in tow, fueling speculation that the second baby had just arrived.

A crowd gathered outside the store to see the MVP up-close. Giannis shared to his Instagram story the scene with the caption, “Love this city” and “It’s all love Milwaukee.”

Riddlesprigger announced the couple was expecting a second baby on May 12.

She posted on Instagram about being a mom to son Liam, and then added: “Oh and I forgot to mention baby #2 is on the way and I’m in for even more life lessons! My kids are my biggest blessing and my greatest lesson!”

“Anytime we see other kids, (Liam) just lights up,” Riddlesprigger told MJS. “I’m just really excited that he’s going to have a best friend all the time.”

Riddlesprigger said that “she’s up for the challenge of having two kids under 2 and that it’s a ‘blessing’ that they’re going to be so close in age,” MJS reported. “(Liam is) going to be such a good big brother,” she told MJS. “He’s such an amazing baby.”

Antetokounmpo, born in Athens, Greece to Nigerian parents, won back-to-back NBA Most Valuable Player Awards in 2019 and 2020, joining Kareem Abdul-Jabbar and LeBron James as the only players in NBA history to win two MVPs before turning 26.

Along with his MVP award, he was also named the NBA Defensive Player of the Year in 2020, becoming only the third player after Michael Jordan (1988) and Hakeem Olajuwon (1994) to win both awards in the same season.

In 2021, Antetokounmpo helped lead the Bucks to their first NBA championship since 1971 and was named Finals MVP.

“I know nothing else but Greece. I have never been to Nigeria. You are not born a Greek, you become a Greek,” Giannis Antetokounmpo said back in 2017 with his brother Thanasis at his side.

The two brothers are the pride of Greece for their accomplishments in basketball, but things did not start off easy for the Antetokounmpo family – something which they do not forget.

“Greece loves us because we are good guys. We promote Greece wherever we go,” Giannis said.