With 75 % per cent of the vote counted in the Cyprus parliamentary elections, results on Sunday show that the main parties are losing ground.

Only one of the seven smaller parties are near the 3.6% threshold to secure a seat in parliament. 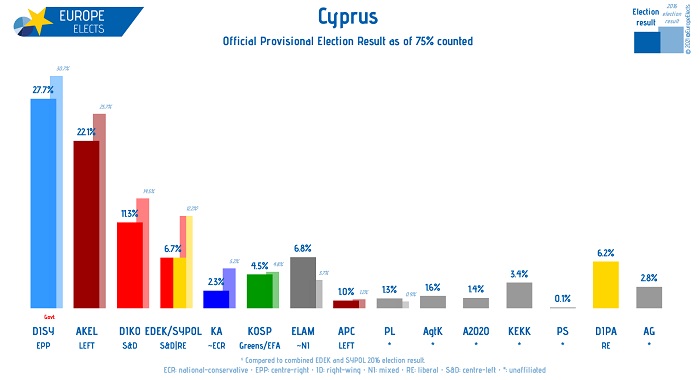 Cypriot nationals will get to elect 56 of the 80 members of the island’s House of Representatives.

The 80 members of the House of Representatives are elected from six multi-member constituencies, with the number of seats allocated according to the population of each area.

Of the 80, 56 are elected by Greek Cypriots and 24 by Turkish Cypriots. However, since 1964, the Turkish Cypriot seats are unfilled and the House of Representatives has de facto had 56 seats since its enlargement in the 1980s.

The elections are held using open list proportional representation; voters vote for a party and can then cast one preferential vote for a candidate on their party’s list for every four seats available in their constituency (party leaders or other candidates heading coalitions are not required to receive preferential votes to be elected).

Cyprus has faced a string of corruption scandals in recent years, and Sunday’s vote was expected to show a drop in support for major parties. Cyprus was left reeling from a cash-for-passports scheme that the current administration had to abandon amid allegations of corruption.

“The protest vote might be the largest segment of voters but it has no single party or single figure around which they would rally their protests, and in Cyprus traditionally the protest vote goes in the direction of non-voting or invalid votes,” Hubert Faustmann, Professor of History and Politics at the University of Nicosia told Reuters.

ELAM, an extreme right-wing party that had affiliations with the now-outlawed Golden Dawn of Greece, has made gains and in the exit polls almost double its support from 2016, when it first elected two MPs to parliament.