Italy won the Eurovision final with the song “Zitti E Buoni” by the rock band Måneskin; France and Switzerland came in second and third.

The Italians scooped up a massive 318 points from the public vote, putting the rock song above national jury winners Switzerland, France and Malta.

Maneskin and their winning song

Greece and Cyprus at the 2021 Eurovision final

Greece participated at the grand final of the 65th annual Eurovision with Greek-Dutch singer Stefania Liberakakis stunning with her performance of “Last Dance,” however the country came 10th after scoring 170 points.

Stefania Liberakakis, known professionally as Stefania, became known in the Netherlands at the tender age of nine, when she participated in the Dutch version of the popular talent show ”The Voice Kids.”

Cyprus, represented by Elena Tsagkrinou with the song “El Diablo,” received 94 points and came 16th at the final. El Diablo has been received exceptionally well by European audiences and Eurovision fans even though it has been quite controversial in Cyprus after being accused of having satanic connotations. 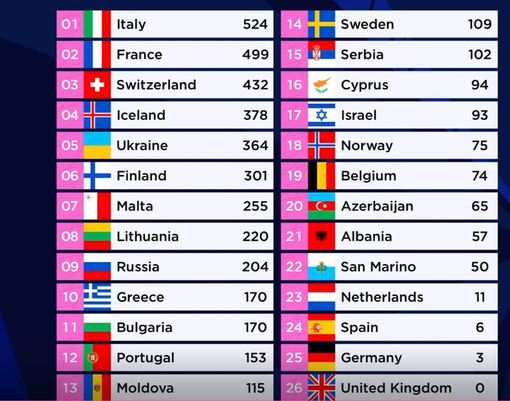 Eurovision Contest and its History

The Eurovision Song Contest, sometimes abbreviated to ESC, is an international song competition organised annually by the European Broadcasting Union (EBU) which features participants representing primarily European countries. Each participating country submits an original song to be performed on live television and radio, transmitted to national broadcasters via the EBU’s Eurovision and Euroradio networks, with competing countries then casting votes for the other countries’ songs to determine a winner.