The orphanage called “Melissa” in Thessaloniki is celebrating 100 years of providing a loving home for children during the year 2021. Now, as part of its centennial celebrations, its staff is trying to find people who lived at the Melissa at some point in their lives, to hear their stories and reconnect with them.

They would like for everyone to spread the word that the orphanage wants to hear from them, including how they lived after leaving the home and what its help meant to them when they needed it the most.

Some of the children who once lived at the Melissa are now located all over the world — including in the USA, according to the orphanage. The Melissa’s Facebook page (Ορφανοτροφείο Θηλέων Θεσσαλονίκης “Η Μέλισσα” tells some of the life stories that they are aware of so far.

But there are many more that need to be told to flesh out the whole story of the orphanage.

According to Kalliopi Kalymniou, the director of the “100 Years of Melissa” campaign, the institution was founded unofficially in 1916 by a group of women in Thessaloniki who wanted to help refugees coming from the Caucasus by providing them with food and clothing.

At the time, the area was being ravaged by opposing forces as Ottoman Turks and Russian troops battled for control of the area. Hundreds of thousands of refugees were forced off their lands, and many came to Greece as a safe haven.

Angeliki Negroponti was responsible for spearheading the efforts to create the orphanage, Kalymniou says, explaining “These women realized that the needs of the refugees only continued to increase as time passed, so they decided to officially found an association named “Melissa” in 1921.”

In 1922 the orphanage in Smyrna (today’s Izmir, Turkey) was burned down during the Catastrophe of Smyrna, and nearly the entire Greek population of the area was forced to flee.

The request sent out by the Melissa asking for former residents to contact the home. Credit: Facebook/StegimelissaAs Kalymniou says, “the headmaster of the orphanage, Katerina Tourtouri, managed to save the 60 children living in the orphanage, getting them out before it burned down. After the destruction of the orphanage, Tourtouri and the orphan children wandered” for several days in Smyrna.

It was only with the help of the American Army that they were able to come to Thessaloniki by boat, Kalymniou adds.

“After they came to Thessaloniki, Tourtouri joined efforts with the union of “Melissa” and together they created an association called the “Melissa Orphanage,” she notes.

The original orphanage was located at 36 Vasilissis Olgas Avenue — in a beautiful, historic building that still stands in the city. The Melissa was co-ed until 1940, when it became an exclusively female orphanage, which it still remains to this day; however, now it cares for not true orphans but those girls who have experienced abuse or neglect at home.

“Throughout the years, the Melissa has played a significant role in the history of the city of Thessaloniki, providing care, food and education to thousands of children,” Kalymniou relates with pride. In 1977, Melissa relocated its facilities to Panorama, Thessaloniki due to damage caused to the original building on Vasilissis Olgas 36.

Specializing in child protective services, the home is supervised by a 12-member, all-female board — comprised exclusively of volunteers.

All the necessary psychological support services are available to the girls who live at the Melissa so that they can feel protected and secure; the overall goal, however, is to guide the girls toward the process of a family reunion, when that is possible. 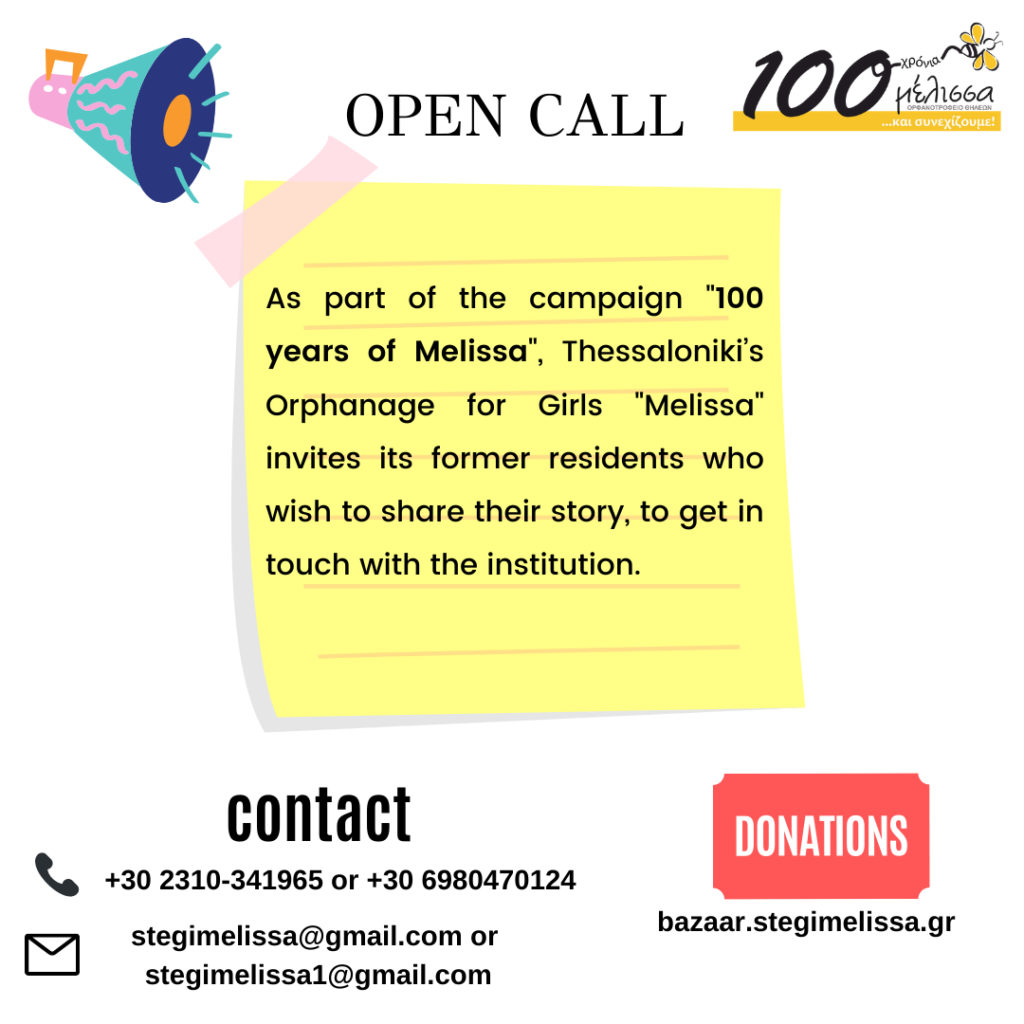 The right “to love and be loved”

Carers not only provide shelter and meals to the girls but create an individual relationship with every child as well, so that every one of them is treated with the respect she deserves, Kalymniou says.

The Melissa’s vision statement, she explains, is to “stand by every child that needs our support, to give every child the opportunity to develop, to become educated, to laugh, to be happy, to share, to love and be loved. Our vision is to be close to our children even after they become adults.”

It is very important, she adds, that when the girls leave the Melissa “they are self-sufficient and able to live with dignity.”

Those who age out of the home are placed for a short time in apartments that are offered by the Association, which continues to support them as they either pursue higher education or jobs, enabling, as Kalymniou says, a “smooth transition into becoming productive members of society.”

However, during these times, she explains, the state welfare budget continues to shrink and child protective services are “let to fend for themselves and solve problems for themselves,” Kalymniou notes. This makes the many volunteers of the Melissa even more important. “During this difficult period,” she points out,” Melissa’s most valuable helpers are the volunteers who offer their time and love to the children and back our efforts.”

Volunteers not only  play with the children, but offer tutoring, perform maintenance on the home, take the children to doctor’s appointments and help with the annual fundraising bazaar.

The Home also has accounts set up with the National Bank of Greece, Piraeus Bank and Eurobank to collect donations that the public wishes to send them.

The Melissa is now celebrating a century of caring for the most vulnerable children of the city. However, due to the decade-long economic crisis in Greece, as well as the ramifications of the pandemic, the home is in a tough financial situation, Kalymniou admits.

A volunteer team of students from Aristotle University of Thessaloniki and the University of Macedonia, along with the Melissa, created the campaign called “100 Years of Melissa.”

“With this campaign, we are trying to showcase the importance of the history of “Melissa”, which has played a significant role in the history of Thessaloniki,” Kalymniou explains, before adding “We are also trying to get in contact with people who have lived at any point in their lives in the Melissa and wish to share their story with us.

“We are trying to gather as much information, as well as stories, from people who lived at the Melissa in order to create a digital archive, as well as a digital database, so the next generations will have easier access to the history of their ancestors and of the home,” she states.

At the end of May, the “100 Years Melissa” campaign will also launch an online 3D exhibition by which people from all over the world can get a glimpse into a small part of the history of  the Melissa, told through photographs. The exhibition will be free of charge and accessible by anyone.

“For the girls who need it the most”

The online photographic exhibition is another vital part of this centennial project. Many of the photos depict guests of “The Bee” from various periods of time throughout the years. If a person does not want his or her image to be viewed, they are asked to please contact the home so their wishes can be honored.

“We know that a lot of the children once cared for by the Melissa now live all over the world,” Kalymniou says. “People have contacted us from Germany, UK, USA, and Australia, to name just a few countries.

“Anyone who wishes to contact the Melissa, even if it’s just to see if there are any documents from their time in the orphanage, can do so through a direct message on Instagram or Facebook or through mobile,” she states.

If you would like to know more about the Melissa and its campaign to reach out to former residents, please visit its Facebook page, here, or its Instagram page, here.

The Melissa even has a Podcast, which is in Greek, for people to be able to follow their quest to hear the stories of their former residents, which you can access here.

All those who would like to make donations to the Melissa can do so by clicking on this link.

The Melissa’s website can be visited by clicking here and its Linktree is here.  The public can also help the campaign by sharing the hashtag #100χρονιαΜελισσα.

Anyone interested in joining the campaign and/or sharing their own stories can contact the Melissa at stegimelissa@gmail.com or stegimelissa1@gmail.com, or by calling 2310-341965 or 6980470124.

As Kalymniou says, the Melissa is “One big heart, one warm hug” — a real home that offers care and protection for the girls who need it the most.