A spectacular scene unfolded this evening at Australia’s iconic Sydney Opera House as the white “sails” of the building were enveloped in a gigantic banner representing the Greek Flag on the day of the Greek bicentennial.

Nick Papas, of Papas Film Photography, captured the jaw-dropping scene as the Greek bicentennial was commemorated in the nation which boasts the largest Greek population outside of the home country. 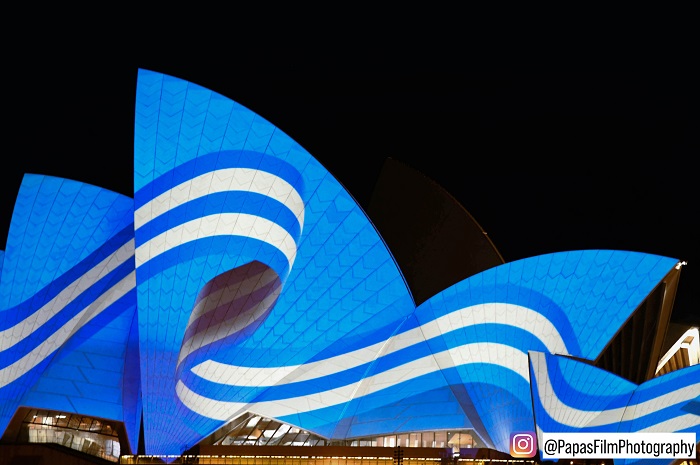 Australian PM Scott Morisson hailed the contribution of Greek Australians in a video message on Greek War of Independence Day.

Morisson said that Australia is proudly home to one of the largest Greek communities in the world.

“Today is a special day for you, celebrating the milestone of 200 years of independence. Thank you to all our Greek-Australians for helping to make Australia the wonderful country it is. Ζήτω η Ελλάς!”

The full statement of PM Scott Morisson on Greek bicentennial

I send warm greetings to all those celebrating Greek Independence Day –– the bicentenary of the founding of the modern Greek state.

On this national day, I join with you in celebrating this modern chapter in the epic story of your ancient land.

For millennia, Greece has given so much to the world –– in philosophy and democracy, science and architecture, art, sport and culture. A record of achievement that has enriched the world.

Greece is a nation committed to the freedoms and liberties of democracy and equality. These are the values and aspirations that bind Greece to its friends around the world.

Australia has been blessed by the presence of a vast Greek diaspora. Australians of Greek heritage have contributed so much to our nation, bringing energy and enthusiasm to a new life in a new land.

From our great cities to our country towns. From milk bars to fine dining. On screen and on paper. In our boardrooms, courts and parliaments. The men and women of Greek heritage who call Australia home drive our national progress with wisdom and courage.

We share a history and a heritage. We have stood side-by-side in war, and sought the same freedoms in peace. Our ties of blood and family bind us together.

Australia is the most successful and cohesive multicultural country on earth. Our multicultural project is a celebration of humanity. It builds on the goodwill, sacrifice and resilience of generations. The Greek diaspora is a treasured part of that story.

I’m delighted to join with the people of Greece, and their families around the world, as you celebrate this milestone in your nation’s history.