Bangor, Maine Will Illuminate Walkway in Honor of Greek Bicentennial

Bangor, Maine, a New England city that attracted many Greek immigrants in the early 1900s, will honor them and the Greek bicentennial this week, as its pedestrian walkway linking three streets will be lit in the colors of the Greek flag.

The Greeks who came to Bangor, once the largest lumber capital of the world, where timber was shipped to ports all over the globe, were drawn there by the many jobs that the city had to offer.

And, amazingly, almost all of them came from just one area, Vamvakou, on the Peloponnesian peninsula. 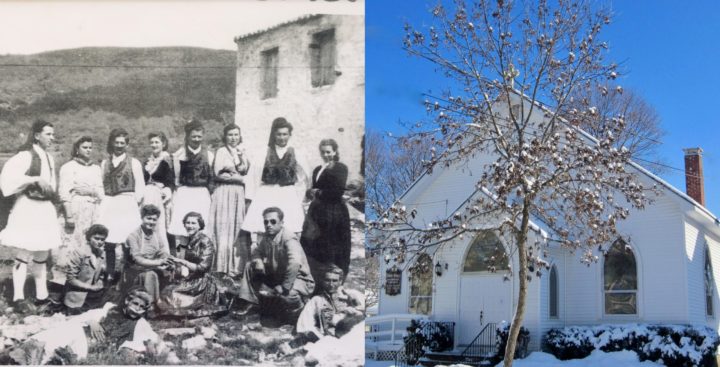 The beginnings of Greek immigration to America

The Greeks living on the Peloponnesian Peninsula suffered a huge blow in the late 1800s due to the sudden and complete collapse of the currant crop there, on which many were entirely dependent. This had been a thriving industry for decades, which had even helped the newly-established Greek state to flourish through its huge exports to Great Britain.

However, a series of misfortunes led the industry to a complete collapse in the 1890s, which was followed hard on its heels by the bankruptcy of the Greek state in 1893 and ”Black 1897,” the year when Greece and the Ottoman Empire plunged into a thirty-day war, with devastating results for the small and financially-struggling country.

The situation in Greece’s rural areas was crushing, with people not even being able to afford the basics for their families, and southern Greeks, long accustomed to hardship, faced a life-changing dilemma: Either stay and continue to suffer, or emigrate and chase the American Dream.

Hundreds of thousands of Greek nationals made the wrenching decision to leave their country between 1890 and 1930, searching for a better life in the US, the country which was believed to provide endless opportunities.

The vast majority of the new immigrants established themselves on the East Coast of the country, and primarily in the Northeast, from New York northward.

The First Greek in Bangor, Maine

This is how the arrival of the first Greek in Bangor, Maine, the northeasternmost state of the US, took place in the late 1890s.

George N. Brountas was born in the small village of Vamvakou, in the Peloponnesian county of Laconia, the famed land of Sparta.

The economic hardships in the Peloponnese’s Vamvakou area led him to Athens at the young age of 12, where he found a job in his uncle’s shipyard. However, the economic crisis of the time, Greece’s default of 1893 and the growing financial depression led Brountas to the courageous decision to move to America.

Brountas first worked in the textile mills around Boston; however, he soon moved north, to the then small but thriving community of Bangor in Maine.

Soon, relatives and friends of Brountas’ came from Greece to live in Bangor, along with other Greeks from other parts of the country, such as Epirus.

Only a few decades after Brountas’ arrival in Bangor, scores of Greek families were living, working and prospering in this beautiful city in Maine. People living today remember a time when nearly every other restaurant in the city was owned by a Greek family.

Of course, along with their great capacity for work and their remarkable drive to better themselves — for which they became well-known in Bangor — these Greeks brought with them their religious customs and beliefs to New England, a region which had of course been a bastion of English Protestant culture for centuries.

It was in the 1920s when the first Greek Orthodox parish was established in Bangor.

In 1926, members of the parish pledged $1,200 to organize the ”Saint George Eastern Orthodox Community of Bangor.” This sum represents approximately $20,000 in today’s currency.

Stavros Niarchos, one of the most prominent Greek shipowners of all time, also helped make the construction of the church possible by donating funds, since he had relatives from Vamvakou and may have known some of the members of the church who had left the village before heading to Maine.

A Niarchos relative is pictured above with a group of immigrants and descendants when they returned to Vamvakou after World War II to visit their family members still living there.

During the week leading up to the Greek bicentennial, these brave people who had lost so much and worked so very hard to forge a new life in the United States, will be commemorated in the city that they made their new home.

And the courageous fighters of the Greek War of Independence will be remembered once again on the day of the Greek bicentennial, 200 years after they gave their all for their beloved homeland.