As the entire world will turn Greek to mark the Greece’s Bicentennial, celebrated on March 25, 2021, the Governor and Lieutenant Governor of Massachusetts issued a touching proclamation for the occasion.

Charles Baker and Karyn Polito explain the reasons behind the proclamation and proclaim March 25th, 2021, to be GREEK INDEPENDENCE DAY in Massachusetts .

Stratos Efthymiou, the Consul General of Greece in Boston, spearheaded the efforts for the commemoration in Massachusetts and elsewhere in New England.

See the complete guide here for many of the New England commemorations on March 25.

Whereas, Greek Independence Day recognizes the 200th anniversary of the independence of Greece and celebrates democracy in Greece and the United States; and

Whereas, The people of ancient Greece developed the concept of democracy, in which the supreme power to govern was vested in the people; and

Whereas, Petros Mavromichalis, the former Commander in Chief of Greece and a founder of the modern Greek state, said to the citizens of the United States in 1821, “it is in your land that liberty has fixed her adobe and . . . in imitating you, we shall imitate our ancestors and be thought worthy of them if we succeed in resembling you.”; and

Whereas, Many Americans fought alongside the Greeks in their fight for Greek independence, while stirring speeches by President James Monroe and Daniel Webster led the Congress to send funds and supplies to aid the Greeks in the struggle for freedom; and

Whereas, The Greek national anthem, the “Hymn to Liberty”, includes the words, “most heartily was gladdened George Washington’s brave land”; and

Whereas, The people of the United States generously offered humanitarian assistance to the people of Greece during their struggle for independence; and

Whereas, Greece heroically resisted Axis forces at a crucial moment in World War II, forcing Adolf Hitler to change his timeline and delaying the attack on Russia; and

Whereas, Winston Churchill said, “If there had not been the virtue and courage of the Greeks, we do not know which the outcome of World War II would have been” and “no longer will we say that Greeks fight like heroes, but that heroes fight like Greeks.”; and

Whereas, Greece consistently allied with the United States in major international conflicts throughout the 20th century; and

Whereas, The government and people of Greece actively participate in peacekeeping and peace-building operations conducted by international organizations, including the United Nations, the North Atlantic Treaty Organization, the European Union, and the Organization for Security and Co-operation in Europe; and

Whereas, Greece received worldwide praise for its extraordinary handling during the 2004 Olympic Games of more than 14,000 athletes and more than two million spectators and journalists, a feat the government and people of Greece handled efficiently, securely, and with hospitality; and

Whereas, Those efforts and similar ideals have forged a close bond between the people of Greece and the United States,

Now, Therefore, I, Charles D. Baker, Governor of the Commonwealth of Massachusetts, do hereby proclaim March 25th, 2021, to be, GREEK INDEPENDENCE DAY. 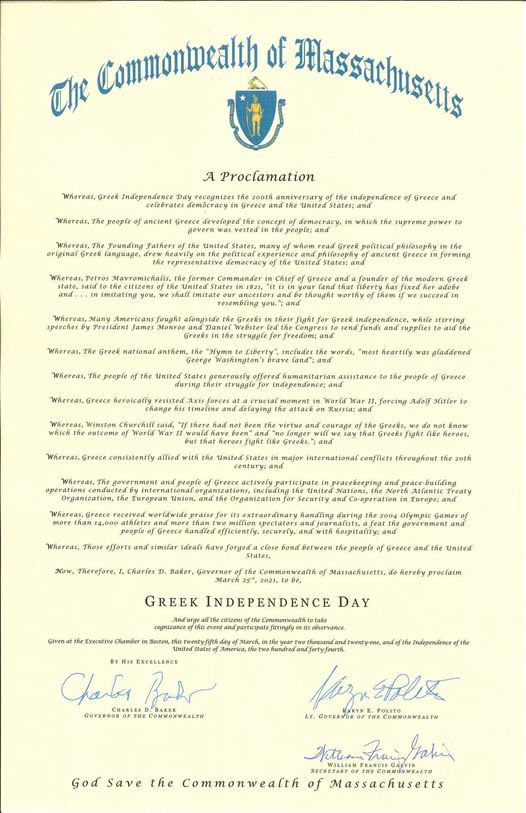