Photographs from a rally organized in Athens on Monday in support of Dimitris Koufontinas, a convicted terrorist who is on hunger strike were censored by Facebook.

Koufontinas is on hunger strike demanding to be moved to a different prison facility.

Images of the rally taken by professional photojournalists were pulled down from Facebook almost as soon as they appeared.

Facebook administrators blocked for 60 days the account of the president of the Hellenic Photojournalist Association, Marios Lolos.

Prominent photojournalist Tatiana Bolari and others were also blocked from posting on the social media platform. 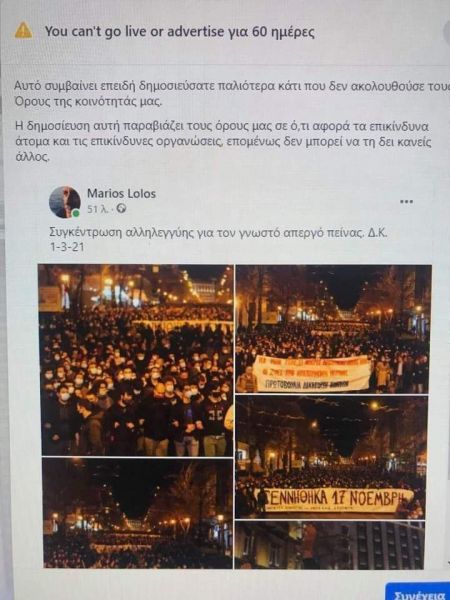 The families of several people killed by Koufontinas urged him Monday to end his 52-day hunger strike, as the government accused him of “blackmail.”

The relatives of his 11 victims urged him “to withdraw his demands and continue to live”.

“His death will not bring any of our loved ones back,” they said in a joint statement.

Koufontinas, formerly the top assassin for the defunct November 17 terrorist group, is seeking a transfer from a high-security prison in central Greece to Korydallos prison in Athens to be near his family.

Doctors at a hospital in the city of Lamia, where he has been receiving intensive care for nearly a month, said his health had “seriously deteriorated”.

Koufontinas life is in his own hands

Greece’s general secretary for anti-crime policy, Sofia Nikolaou, on Tuesday said that he has the right to apply for early release in September.

She questioned why he has resorted to extreme measures to secure his transfer from the prison.

“Why is he on hunger strike?” Nikolaou asked in an interview with Skai TV.

“His life is in his own hands. If he believes that the law has been violated, why doesn’t he take recourse to justice?” she said.

Nikolaou also reiterated that Koufontinas’ demand to be transferred to the capital’s Korydallos Prison cannot be met, as this particular penitentiary has been designated as a pretrial detention facility.

It does not have the security features required to house lifers like the November 17 assassin, who is serving 11 life terms plus an additional 25 years, she said.