TechNews
GreekReporter.com Greek News Crime The Story of the Two Greeks who Became Spies for Turkey

The Story of the Two Greeks who Became Spies for Turkey

By Tasos Kokkinidis
December 14, 2020
Facebook
Twitter
WhatsApp
Linkedin
Email
Two Muslim Greeks, originally from Western Thrace, home to a sizeable community of Muslims, were arrested and charged for espionage on behalf of Turkey on the island of Rhodes over the weekend.
One of the accused is a secretary in the office of the Turkish consul in the city of Rhodes, whose activities have been monitored by the Greek secret services for years, and the other is a chef on a ferry that has been operating on local routes between Rhodes and Kastellorizo.
The two are accused of spying by taking photographs and gathering other sensitive information about Greek military installations and troop movements in the southeastern Aegean.
During the interrogation, the 54-year-old chef denied he spied for money. “I did it for my homeland, Turkey,” he was quoted as saying.
Greek authorities are investigating whether the chef ​​had taken the photo which recently was reproduced by Turkish and other international media that showed Greek National Guard soldiers getting off a ship in Kastellorizo. 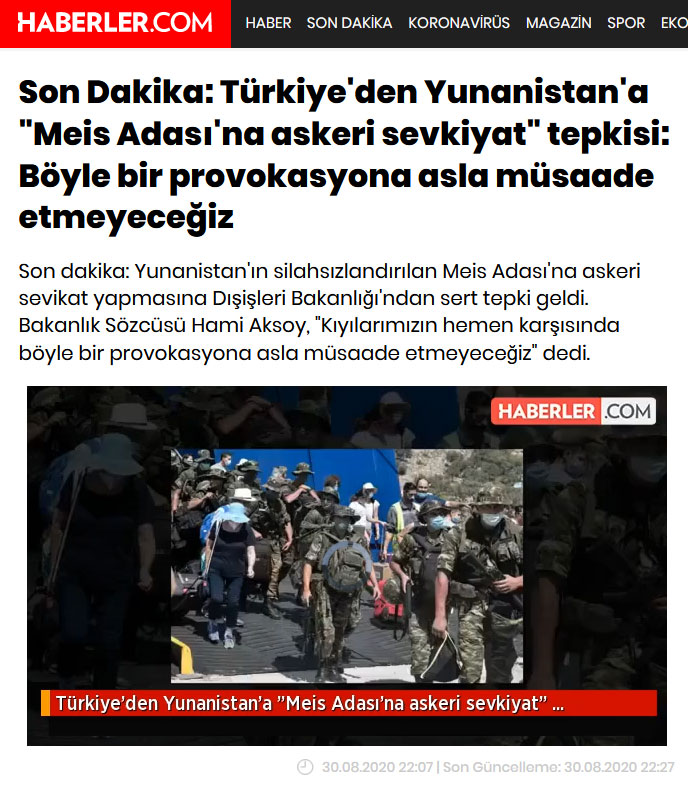 Turkey tried to score a propaganda victory with this particular photo, claiming that Greece was violating the Paris Treaty, drawn up in 1947 and calling for the demilitarization of the Dodecanese by sending troops to the island. However, as international law experts point out, Turkey has not signed the Paris Treaty.
“Independent Western Thrace”
The 35-year-old secretary from the Turkish consulate was asking the chef to eavesdrop on soldiers traveling on the ship on which he worked, to inform him of their numbers, to take pictures of Greek warships that were in the area last summer — when tensions with Turkey reached a boiling point — and to photograph fortifications.
According to intelligence sources, the duo would meet at a cafeteria in Rhodes, where the chef would hand over photographic material to the secretary of the consulate.
The secretary for the Turkish consulate has been under surveillance by the intelligence services for many years, as he was openly propagating an “Independent Western Thrace” in the social media.
Investigations have reportedly shown that the 35-year-old traveled frequently to Istanbul, where he had contacts and developed relationships with the Turkish secret services.
He was hired at the Turkish consulate in Rhodes initially as an interpreter, but quickly, according to investigators, he became the “right-hand man” of the consul.
After searching their homes, Greek police recovered computers, mobile phones and four locked usb’s. All the material has been sent to the appropriate forensic laboratories.