US Sees Greece as Regional Hub for Innovation and Entrepreneurship

By Tasos Kokkinidis
December 1, 2020
Facebook
Twitter
WhatsApp
Linkedin
Email
US Ambassador to Greece Geoffrey Pyatt said on Tuesday that Greece can progress economically and technologically and become a regional hub for innovation and entrepreneurship.
Speaking to the President of the American-Hellenic Chamber, Nikolaos Bakatselos, at the 31st annual Greek Economic Summit (GES), Pyatt said that the challenge going forward is to unleash the power of the Greek people.
“The digital transformation has a lot to do with unleashing the fantastic potential that you see in the Greek diaspora, that you can see among young people, in the start-up community.”
The American diplomat was among the speakers on the first day of the GES, organized by the American-Hellenic Chamber of Commerce, which works to enhance economic, business, and trade collaboration between Greece and the US, in cooperation with the Athens Stock Exchange.
Pyatt noted that the most major achievement for Greece in recent years is that it “has returned to the status of a normal, prosperous, European democracy.”
“Reading the memoirs of former president Obama reminded me of all the anxiety at the time regarding the state of the Greek economy and the risk that Greece would pull down the whole Eurozone,” Pyatt said, adding “Nobody asks these questions anymore.”
The discussion between Pyatt and Bakatselos starts at around at 1.39′.55″:


“Greece has become a model of good governance and strong performance. A model other European countries aspire to in terms of the challenge that the pandemic has presented,” he added.
Pyatt outlined the interest big American multinationals, such as Microsoft and Pfizer, have shown in investing in Greece, and expressed optimism that additional firms will follow in their steps in the fields of technology, energy and shipping.
“The government’s strong performance in managing the pandemic has helped significantly with the investments,” Pyatt stressed.
“Every time you see a CNN or a Washington Post story talking about Greece as an example of successfully responding to the pandemic following the advice of scientists, working to minimize the economic disruption — that’s money in the bank,” he added.
Responding to a question posed by his host, Nikolaos Bakatselos, Pyatt said that the biggest challenge facing investment in Greece is “to remove the barriers and impediments that government and bureaucracy can present.”
“American companies need to see that not only their investments are safe but that they are delivering better than expected,” he added.
Asked about the transition in the White House and what this may bring to US-Greek relations, the American diplomat said it is “a really important moment for Greece to communicate to American authorities how Greece can continue to work with the US to build a strong transatlantic community, a more stable and prosperous western Balkans and eastern Mediterranean.”
Regarding his role, the Ambassador replied that he “will be working very hard in the next weeks to ensure that the President-elect’s team will be able to pick up right where we left off. To strengthen the very strong foundation of bilateral relations.”
The Summit, called “Forging Ahead in Challenging Times,”  is held in partnership with the U.S. Chamber of Commerce and the Atlantic Council.
It has quickly established itself as a national institution, setting the agenda for political and economic issues dominating relations between Greece, the US and Europe.
A highlight of this year’s event will be a roundtable discussion featuring Greek Prime Minister Kyriakos Mitsotakis, the Vice President of the US Chamber of Commerce, Myron Brilliant and the CEOs of leading multinationals: Albert Bourla, the CEO of Pfizer, Andre Calantzopoulos, the CEO of Philip Morris International and Punit Renjen, the Global CEO of Deloitte.
The discussion, to held on Wednesday, December 2, will be moderated by the President of the American-Hellenic Chamber of Commerce, Nikolaos Bakatselos.
To register and to view the latest agenda and speakers list for the conference, please click here.
Keynote speakers will also include the following: 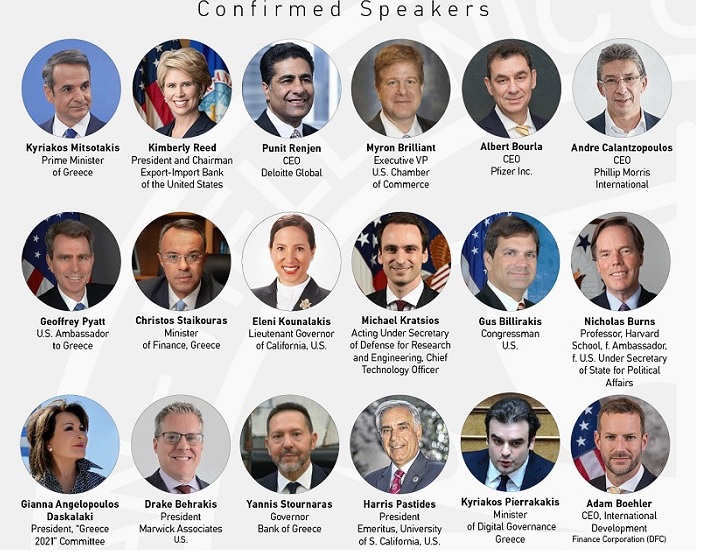