GRNews
GreekReporter.comEuropeArmenians in Tearful Goodbye to their Own ''Sumela'' Monastery

Armenians in Tearful Goodbye to their Own ”Sumela” Monastery 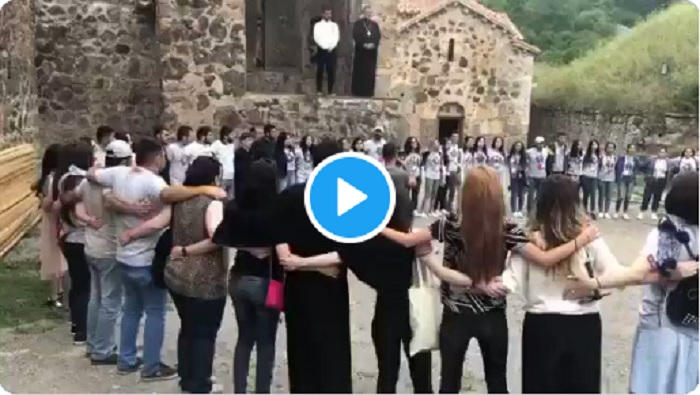 Just like the Greeks who were forced to give up their precious cultural heritage of Pontus and Asia Minor to the Turks a century ago, Armenians did the same over the weekend as they bid farewell to Dadivank Monastery.

In a video posted on Twitter, tens of ethnic Armenians are being seen singing and dancing in front of the Monastery located in Artsakh’s Karvachar region before they say goodbye to these lands.

The monastery was built between the 9th and 13th centuries, and it holds a special place in the hearts of Armenian Christians, similar to what Panagia Sumela was for the Greeks of Pontus.

The monastery will continue to hold Christian liturgies and will go under the protection of the Russian peacekeeping troops in the coming days.

Moving scenes continue to come from the region of Nagorno-Karabach in the Caucasus, where ethnic Armenians are getting ready to leave their lands before the area goes back under Azerbaijani rule.

Following the recent ceasefire signed between Armenia and Azerbaijan, thousands of ethnic Armenians who live in the contested region of Nagorno-Karabach left their homes and lands.

Pictures from the village of Charektar, that will be handed over to the Azeris, showed earlier Armenian residents setting fire to their property.